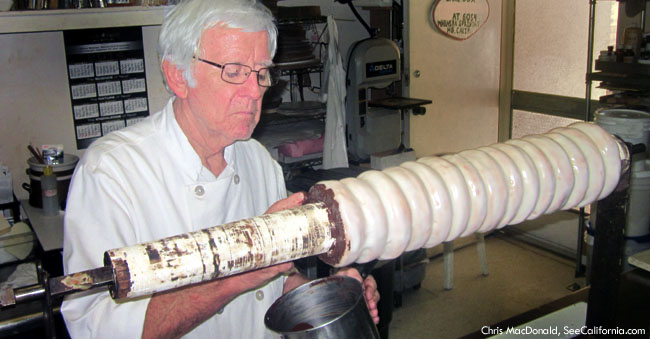 Baumkuchen Baking Busiest Ever for the Holidays

Huntington Beach, CA--Master Pastry Chef Paul Gauweiler is having the busiest holiday season ever, creating his world-famous "baumkuchen." The 77-year-old "Baking Santa" has been working over 12 hours a day, seven days a week for the past month, designing more "tree cakes" than ever before on his antique machine, one of only three in the United States.

"The demand's incredible--the biggest in my 40 year business!" said the impish chef from Hannover, Germany, who owns The Cake Box at 6054 Warner Ave, Huntington Beach. "One Texas lady ordered 23. Then she arrived to pick them up on her way to an employee party in Las Vegas. She saw 5 more in our bakery and bought them too." Half of the 1 ˝-pound cakes featured chocolate, the rest glaze.

A man living in Hawaii, called to order a two-foot long tree cake. Disneyland ordered six, two-foot long ones for a recent celebration. A woman from Guatemala came in and ordered 15 Baumkuchen for her doctor husband to give to clients. The phone just doesn't stop ringing. No wonder Paul and his delicious cakes have been featured in New Yorker Magazine, The Los Angeles Times, The Local News and on KTLA-TV.

Why are these cakes so popular? "People love to give them as special presents and once the recipients take a bite, they want to order them also," said the former head pastry chef at Disneyland, who met his beautiful chef wife, Irene, when they worked in a Paris hotel long ago. Even their son, Eric; grandson, Brandon, and their good friend Laura, work tirelessly in the bakery, creating the things dreams are made of.

But making a "tree cake" is anything but easy. Using a rare piece of machinery, each layer is created on a rotary spit in front of dozens of gas-fired flames. They have at least 8 layers (and as many as 20) made by ladling apricot and other butters onto the revolving delicacy. The tallest cake is 40-inches and can feed about 140 people. Baumkuchen for years have been used at presidential state dinners, weddings and special gatherings in Japan, South America, Canada and in the United States.

Watching Paul (and his elves) create this magic wonder, you can not only feel the heat of the flaming burners but his meticulous love and passion for baking, which he started to do when he was 15. Baumkuchen reminds many folks of their holiday times back home long ago, where families gathered around the tree cakes with awe and wonder. The "Baking Santa," continues to bring back fond memories for everyone lucky enough to bite into his spectacular delicacy. You can too!