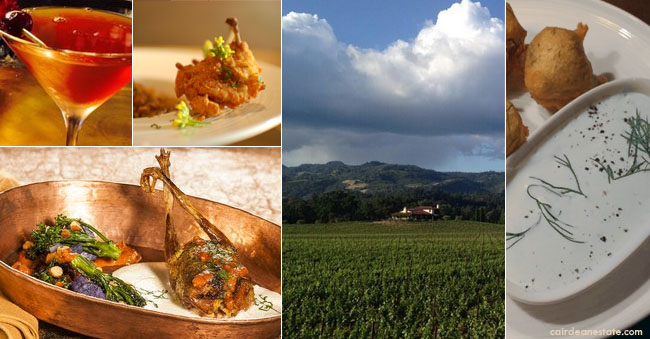 The Farmer & The Fox

In June 2014  The Farmer & The Fox opened at Cairdean Estate. It quickly caught the eye of Michelen Guide editors out on the prowl looking for exciting things to howl about for their 2015 edition. Maybe it was the squab tikka masala $32, game pie $15, fried quail and barley stew $17, or lamb tartare $12, that caught a sly fox's eye, but whatever the magic, The Farmer &amp; The Fox was handsomely rewarded with The Bib Gourmand. In the world of Michelin, this is one of the awards you'd like to get. It's the bonus for all the thought that went into preparing menus offering reasonably-priced gourmet tastes utilizing game, fish, and locally sourced ingredients. It's the icing on the Ginger Ice Cream Cake, and the celebratory salute, sipping Cairdean Estates Zinfandel Dessert Wine.  The award category looks for meals with good value offering two courses and a glass of wine or dessert for around $40. The Euro-style gastropub under the direction of Chef Joseph Humphrey is designed with an English or Scottish pub in mind.