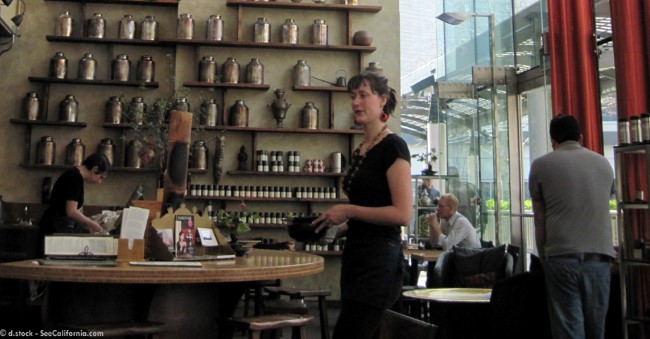 SAN FRANCISCO, CALIF.-- According to Samovar Tea Lounge founder Jesse Jacobs, the tea house exists with one purpose: to satisfy the deepest human need for connection. There are three Samovar Tea Lounges in San Francisco as of last report. And each of them accomplishes the task in one way or another. Initially it is with your first encounter with the restaurant staff that you discover they hire fairly grounded, nice people whose personalities seem to go with the shops.

Then if you are alone, your 2nd connection is with the tea and food. Both are exceptional. You can purchase their teas online, or better yet, visit a Samovar Tea Lounge in San Francisco. According to the owner, the business has taken worn out spaces such as defunct coffee houses and managed to turn them into enlightening city oases providing tea, healthy food, and a pleasant atmosphere to enjoy the finer things.

With his first shop founded around the time of the dot.com bust, the Tea Lounge in Mission-Castro district, the place provided a calming effect for stressed out people who thought the city would never return to its former glory, according to Jacobs. The shop opened in 1991 and is located at 498 Sanchez Street (on the corner of 18th Street) San Francisco, CA

Samovar Tea Lounge at Yerba Buena Gardens above the Martin Luther King waterfall opened in 2006 in the space of a failed Starbucks (if you can fathom that). There is a Starbucks within two blocks, however. The location serves office works & tourists both...and seems quite popular.

Samovar Zen Valley, a collaboration with Zen Institute, opened in 2009. It is tucked in a quiet neighborhood nook, says Jabobs, because the area up the hill from Hayes Valley needed a Samovar as the economic turmoil and chaos of 2009 created so much stress. 297 Page Street at Laguna Street, San Francisco, CA 94102 Phone: (415) 861-0303