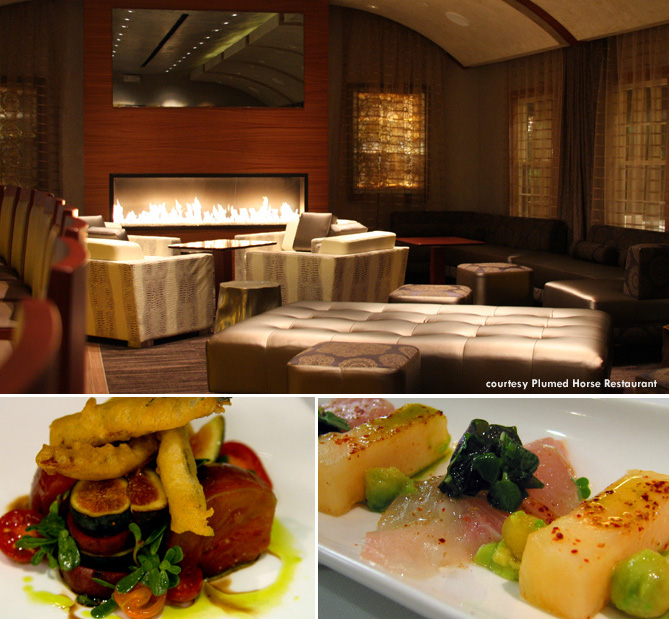 Overview: Like San Francisco's Spruce, the Plumed Horse was the most anticipated opening. In the old days, Saratoga had two fancy  restaurants: the Mouton Noir and the Plumed Horse. Both formal - both very French. A million dollar re-do of the Plumed Horse has brought it into the modern era. And not surprisingly, they owners hired Peter Armellino, from Aqua. I've followed his career for years and I knew someday he would be a star.

If you hit the lottery, go for the caviar service – it starts at $95 and goes to $225. Not being that lucky, we opted for the Camembert cheese fondue, with duck fat fried fingerling potatoes and black truffle and also the Maine Sea Scallops with an interesting oxtail "marmalade" and horseradish foam. Shades of Spain's Chef Ferran Adria.

I fell in love with my entrée, the Peking-style California squab with ginger cabbage, dried plums with barley-corn pancakes, and could eat it once a week for a year. The squab looked as if it had been shellacked and the other components of the dish couldn't have paired better. Armellino doesn't let a steak just appear. His New York strip is dry-aged, prime and accompanied by tempura vegetables, yuzu-butter potatoes with a sprinkle of pink salt from Hawaii.

We had to have the baked California. Like a baked Alaska of yore, it involves meringue and ice cream. Plus sorbet. The "new" Plumed Horse will surely gallop into the century delighting all who pass through its portals.