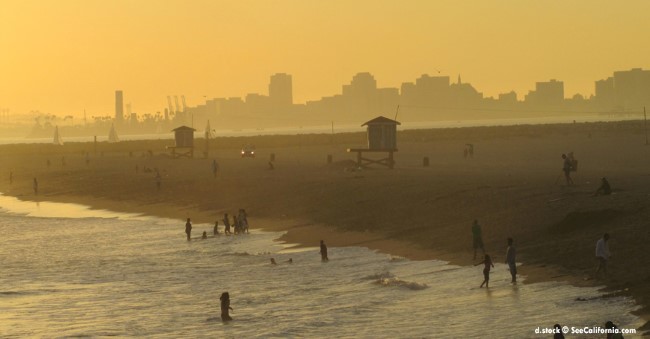 Seal Beach, California -  Mahe Seal Beach is recognizable by the neon fish sign and red neon that surrounds the building at night as you drive by the building on Coast Highway in Seal Beach.

Serving meals to Californians and visitors for over 70 years, Mahe is one of Orange County's oldest businesses known by many as Glide'er Inn.  A small model glider plane on top of the building pays homage to the restaurant's roots. It originally was located next to a dirt landing strip where old-time aviator Ray (Pop) Crawford built gliders, hence the name.  Established in 1930 Glide'er Inn was moved to its current location at some point, and its location has served the restaurant well. It's hard to drive by and not stop when you see all the cars lined up and the colorful glow from the neon that lights up the building and parking lot.

Like so many restaurants in Southern California--Don the Beachcomber, No Ka Oi, Duke's,  and Buster's nearby--the love of the island life apparent in the cuisine and decor.  The Seal Beach restaurant is named after Mahé, the main island group of 41 mountainous islands  at Seychelles, an island nation in the Indian Ocean off the east coast of Africa described as Paradise on Earth.

Seal Beach is all about friendship, and the restaurant offers a warm, abiding club atmosphere of a dinner house where family and friends can come in their casual attire, sip cocktails, and dine on top notch sushi, steaks and quality meats.  A full sushi bar,  full cocktail bar, and area where bands perform at night provide a reason to dine and stick around for entertainment, like so many customers do.

Known to excel in its sushi and fresh fish offerings, those who aren't sushi fans can dine on delicious cuts of lamb, angus steaks, and chicken cooked expertly over a grill that sears the meat to the tee. Prominently displayed as you enter the front door is a big, chilled glass case where the sushi chef takes the fish and prepares the cuts for guests. It's clear to see the fish is fine quality. Many loyal fans rank this is their favorite spot and raise their hands in resounding applause. Some actually watch the calendar or clock and call up to confirm that specialty fish have arrived such as Copper River Salmon, only available a few weeks out of the year.

Desert items are not complex, but they do satisfy. Seasonal fruits such as grilled pineapple with vanilla ice cream, and use of coconut, cinnamon and bananas, the primary crops of the Seychelle, are often integrated into meals and desserts recipes.