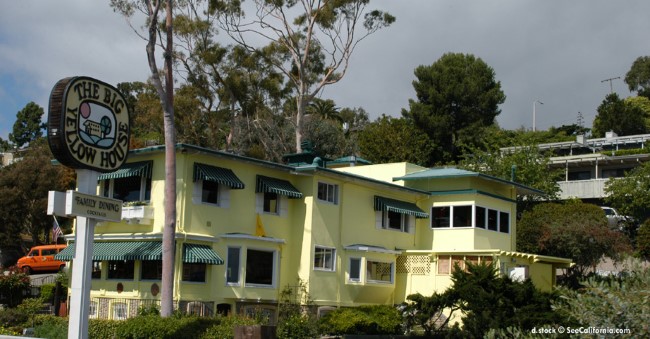 The Big Yellow House is out of business in Summerland, but for many years this restaurant was one of the last in a chain of popular home-style places that invited you in to a dining room to each a big, hot meal.

The owners and the four adult daughters of the original family owners of the Big Yellow House were not alone in caring about its fate. Private citizens also wanted to know what would become of the over 7,000 square foot about on 108 Pierpont in Summerland.

"Selling the Big Yellow House was a long and difficult decision for us," said Jeri Spencer, one of the four sisters who inherited the house in 2003 from the estate of John and June Young. "We knew it was a landmark, and we now believe that it will continue to be preserved as a landmark. We are so pleased knowing that the new owner plans to restore and revitalize the property," Spencer continued.

The historic structure was built as a private residence by Mr. H.L. Williams, the founder of Summerland, in the late 1800's. The town initially attracted a unique population of spiritualists, and The Big Yellow House, like many original buildings in Summerland, is rumored to have ghosts. The house was purchased in the early 1970's by John and June Young. June Young had already demonstrated her gift for knowing what would attract attention (she was a founder of Santa Clause Lane), and promptly painted the beige Victorian house yellow with a bright orange roof. The house could not be missed; the community was up in arms.

For many years, kids meals were priced "by the pound" - not the food, but by the weight of their youngest customers; children under 10 would be weighed on a great scale and their meal priced accordingly. June Young died in 2003, her husband John Young in 1995.

The Big Yellow House was truly a risky venture, but John Young was willing and able to wholeheartedly support June's vision, and indeed The Big Yellow House started a commercial renaissance leading to the Summerland we know today. June Young left a legacy in memories for her family and for the entire community. Since that time, the building has been leased to various restaurant operators who, in appreciation of the landmark it had become, kept the name it was know by -The Big Yellow House.