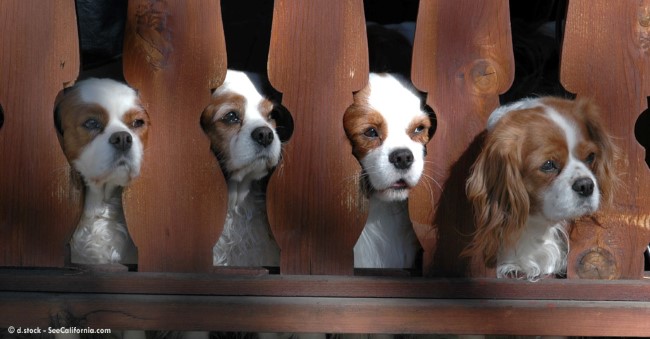 Has California Gone to the Dogs?


When you go to a farmer's market where dogs aren't allowed, don't be surprised when you ask how old the baby is in the  carrier or sling, only to discover a healthy, mature dog panting and smiling back at your inquisitive eyes.  California has gone to the dogs, and sometimes the love affair seems cute, while other times the habits of pet owners seem perplexing--maybe even obsessive. Around three-fourths of dog owners think of their pet as a family member--and many seem to treat the dog better than their children.

Here are a few of the unusual resources for people to explore so they can appreciate their family members (dogs) even more!

According to Hiby, when you call, she speaks to you about your pet on the phone, but is "talking" to your pet telepathically. Your animal companion's name is their own personal radio frequency that she dials in like a radio wave. "I truly understand people being skeptical about this process - all I can say to answer them is that I do half of my business over the phone with people literally all over the world."

At a swap meet a senior couple sat on a park bench snacking on a muffin. Their little chihuahua sat on the man's lap and tried to win his heart for some snacks (it worked). "This is our child," said the man, "though I blame my wife for spoiling our little baby."

The trends are clear. While some businesses are losing market share, pet products are on the rise, thanks to those who own dogs and are pampering them with best foods, finest clothes, and even toys.   In fact, pet products now outpace toy sales-- people in the U.S.  spend several billion dollars more on pet goods than they do on toys for kids. Of the 73 million homes in the U.S. with dogs, there are some households where the dog is treated better than the children.

Californians own the most dogs of any state in the U.S., spend the most money as taxpayers to have unwanted dogs euthenized (including 25% that are purebreds), and insurance companies pay out more money in dog bite settlements in California than any other state. With some of the most comprehensive laws dealing with dog bites, owners will normally be found liable in dog bite cases that occur in public places.

Nearly 40% of California households own at least one dog and they are convinced it's good for their health. The statistics support the notion that dogs can help lower blood pressure, decrease incidences of heart attacks, and reduce depression in humans. But in tough economic times, dogs can also become a source of stress. Since 2009 there has been an upward trend in people relinquishing their pets to shelters. They cite financial difficulties and home foreclosure as several reasons they have to get rid of the pooch.

One thing is certain--pet ownership is in no danger of going away, and money spent on dogs will continue to increase. That's what the data suggests. New products and innovations include a self-warming dog bed, doggie safety seats, and health and beauty products such as shampoo, conditioner, and toe nail polish. No kidding!

If you are having trouble coping with the loss of a pet, you can get grief counseling.  If your pet has behavioral issues, there's an expert who talks to your pet and will tell you what the critter says. And if you miss a dog that has died, there's a person who talks to pets on the "other side".

Dog Statistics in the U.S.

* There are approximately 77.5 million owned dogs in the United States
* 39-40% of U.S. households own at least one dog
* Most owners (67 percent) own one dog
* 24% of owners own two dogs
* The proportion of male to female dogs is even
* 19% of owned dogs were adopted from an animal shelter
* On average, dog owners spent $225 on veterinary visits (vaccine, well visits) annually
* 75% of owned dogs are spayed or neutered

Leading insurance provider State Farm has compiled a list of statistics detailing the number of dog bite insurance claims it received in 2010. As far as State Farm claims are concerned, California leads the pack with a total of 369 claims and roughly $11 million in payouts. This averages nearly $30,000 in payouts per dog bite claim.  Los Angeles postal Carriers receive the most bites in any California city.

What to do if you think a dog may attack:

If a dog attack seems imminent, reach for the closest possible object to place between you and the animal. This could be anything from a bicycle to a purse or backpack.

*For every human born, 7 puppies and kittens are born.

*More than 12 million dogs and cats are euthanized in shelters each year.

*As many as 25% of dogs entering shelters each year are purebreds.

*Approximately 61% of all dogs entering shelters are killed.

*It costs approximately $100 to capture, house, feed, and eventually kill each stray animal -- a cost which you, the taxpayer, eventually pay.