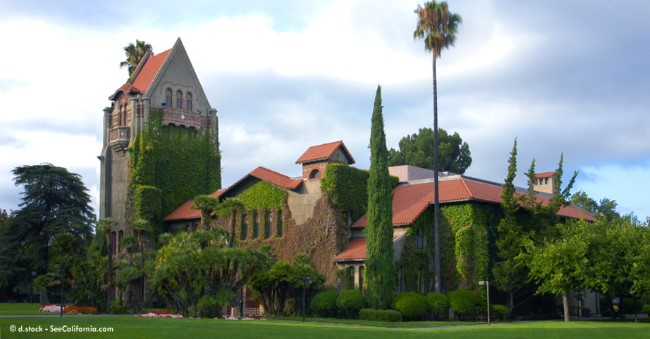 San Jose State University Campus worth a visit on your next vacation to San Jose, California.

San Jose State is the oldest public institute of higher education on the West Coast, founded in 1857. Originally it was a normal school for teachers in the western frontier of the United States. It was also the first school established in what would later become the California State University System.

San Jose State University enjoys a location close to the heart of the city and its museums, yet its elegant buildings and lush lawns transport students and visitors to another era. Like most universities, the campus is a blend of old & new, and one of the showcase buildings that's "new" is the  state-of-the-art Martin Luther King, Jr. Library.

The San Jose campus during its history as the oldest higher learning institution spawned largest university system in the country with 10 universities and 23 state universities for a total of 33 campuses.

Facilities
San Jose State University boasts a year-round, Olympic-sized swimming pool that is Northern California's largest. The Event Center has basketball and racquetball courts, a small weight room and a climbing wall and hosts rock concerts and other events. The Student Union features a bowling alley, a cafeteria, bookstore and game room.

Dr. Martin Luther King, Jr. Library
New eight-story city/university library at the corner of Fourth and San Fernando Streets is first in the nation to be funded, managed and operated by a city and a major university. The $177.5 million cooperative project between the city of San José and San Jose State University opened in August 2003.

San Jose State University defines its mission as "to enrich the lives of its students, to transmit knowledge to its students along with the necessary skills for applying it to the service of our society, and to expand the base of knowledge through research and scholarship."

Bachelor's degrees are awarded in a number of different disciplines, including African-American studies, art and design, aviation, the sciences and humanities, engineering, economics, education, environmental studies, industrial and systems engineering, meteorology, nursing, recreation and leisure studies, social sciences, and theatre arts. Minors are also available in a number of programs.


San Jose State University, commonly shortened to San Jose State and SJSU, is the founding campus of what became the California State University system. The urban campus has an enrollment of about 30,000 students, and claims to have more graduates working in Silicon Valley than any other college or university.