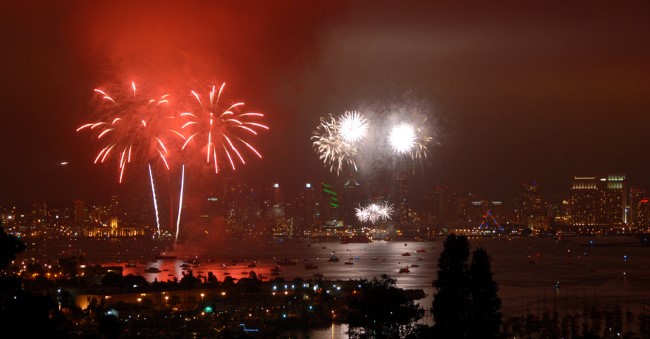 SAN DIEGO: Big Bay Boom Spectacular July 4th Fireworks Show at 9 p.m., July 4, is sponsored by the Port of San Diego. Four fireworks barges are placed strategically around Shelter Island, Harbor Island and the North and South Embarcaderos. Premium viewing is available from all of the Port's parks around the northern and central San Diego Bay area. These include Shelter Island, Harbor Island, Spanish Landing, Embarcadero Marina Parks North and South, Cesar Chavez Park and Coronado Tidelands Park. The Big Bay Boom will have another location in Imperial Beach. Fireworks are discharged off of the Imperial Beach Pier. It is anticipated that the fireworks show will last approximately 17 minutes. Free shuttles will be provided. Info:  bigbayboom.com

LONG BEACH: Fireworks over the Bay. You can buy tickets from Queen Mary ship for their celebration, or book a fireworks extravaganza cruise with Harbor Breeze Cruises to see the fireworks show on July 4.

LOS ANGELES: Cars & Stripes Forever is a free event from 5 p.m. to 10 p.m. at the Gateway Plaza Fanfare Fountain.

SAN FRANCISCO: Fourth of July Celebration at Pier 39 on July 4, from 2 to 11 p.m. At 2 p.m. The patriotic band, takes the stage. Then at 6 p.m. visitors to this free event can dance to 80s band, Tainted Love. Look to the sky at 9:30 p.m. as the City of San Francisco presents a spectacular fireworks display over San Francisco Bay, followed by a mix of the hottest tracks at 10 p.m. Enjoy post-fireworks savings at participating merchants until 11 p.m. See: pier39.com

EUREKA: Fireworks on the Waterfront J
The festival runs from 10 a.m. - 5 p.m.
Fireworks at 10pm - best viewing, the Boardwalk (foot of F or C Sts.), and Halvorsen Park (at the foot of L St.) See: eurekamainstreet.net
Music, Food, Fun along the Eureka boardwalk, and celebrate Independence Day with great food, live music, and fun for all ages. The festival spans five city blocks along Second Street between D & F streets, and will include more than 100 vendor booths. There will be live music on two stages, classic cars, kids activities and fire trucks. Vendor booths will feature a wide variety of foods, crafts, commercial items, fine art and community groups getting the word out about their organizations.

REDWOOD CITY: Port of Redwood City 4th of July Fireworks at the Port, Plus Parade & Festival in Downtown Redwood City The 4th of July fireworks will be launched from the Port of Redwood City, extravaganza will start at approximately 9:30 pm. Before that, a classic rock group named Push, starring as lead singer Bay Area new anchor Dan Ashley, will perform at the Port waterfront stage starting at 7 p.m. The fireworks can be seen from areas where there is a clear view of the skies above the Port, and can also be seen from high points all over the Peninsula. For those coming to the Port, early arrival is highly recommended because this area is mostly private property with very limited public parking. The Port is providing a public viewing area along the waterfront off of Seaport Court. Once all of the very limited public parking spaces are filled, Seaport Boulevard will be closed to all vehicle traffic at the intersection of Seaport/Blomquist. redwoodcityport.com/

Music, food, interactive youth play area, and of course Fireworks! Get your spot at Marina Bay Park and enjoy the festivities until the fireworks show at 9:15 pm.