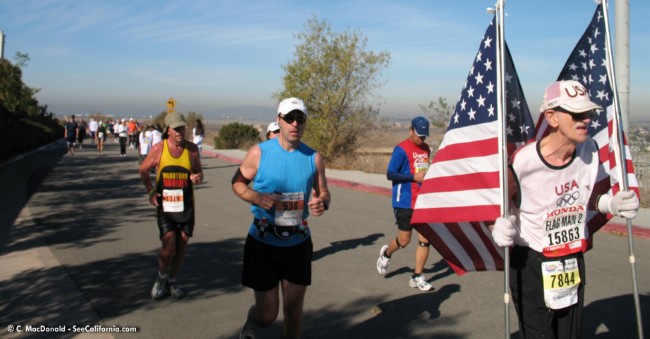 HUNTINGTON BEACH, CALIF. -- This Boston qualifier marathon on Super Bowl Sunday invites runners and their families to an event going more than 20 years strong. Enjoy a partial ocean view course. The event sells out each year when it reaches its maximum registration which is usually around 15,000 to 20,000. Included are half runs and smaller run distances, as well.

Launched several decades ago, we remember when Diane Baker, the former Visitors Bureau president, went before City Council and pitched the idea of holding a marathon during what has been considered the "shoulder" season for tourism. It's when the hotels generally have ample room for accommodating overnight guests. There was a fair share of opposition as residents did not want their streets closed (including Pacific Coast Highway which connects Huntington Beach to Newport Beach and coastal points south through San Clemente, and points north all the way through L.A.)

After much discussion, the marathon concept finally did pass with assurances the roads would open right away after the event, and the event would provide benefit for a city in need of revenue as a bedroom/tourist economy primarily.

The event had to prove itself during the first several years and go back to the council for approval each time. As popularity grew, the marathon became a tradition and there was no longer discussion about it NOT happening, even during the time that the race management firm changed hands.

The marathon, itself, traverses a mostly flat course that goes along the ocean, veers inland through Central Park and back to the beach once again. The marathon is limited to approx. 2,000 runners, who begin at 6:30 a.m. and have a course limit of 6 hours to complete the event. There are many volunteers, Aid Stations include fresh water, sports drinks, energy foods, and snacks. The race provides official finish times, finisher medals, and post-race refreshments. It is USA Track & Field certified. The highest point less than 100' above sea level and the steepest course grade is approximately 6%.

The Course: The race begins on Pacific Coast Highway in front of the Waterfront Hilton Beach Resort. It heads north on Coast Highway, turning right on Seapoint Ave. Runners go to the dead-end of Seapoint, turn right onto Garfield, and the first left onto Edwards. The run down a hill, turning into Central Park. They run across the park and across Golden West Street, circling the Huntingt0n Beach Central Library. They head back nearly the way they came (on Ellis this time) and run back on Seapoint to Pacific Coast Highway once again. They then head further north, and do a loop on coast highway to add extra miles. Finally runners head south once again to the point of origination at Waterfront Hilton.

Along the way there are surf bands, family bands, and all sorts of fun things going on. For observers, it is an entertaining event to watch. Road closures begin very early so parking is a consideration if you want to come and watch.

Another race event held on the same day in Redondo Beach is the 10K Run with a baby buggy race, costume contest and smaller run events for kids and adults.