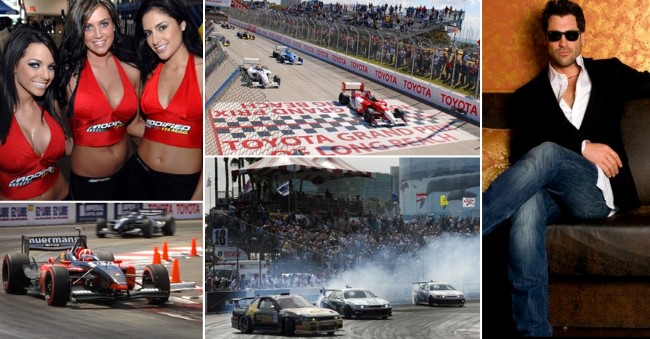 Long Beach, Calif. --  Celebrity racers started their engines for the last time on April 16, 2016. Grand Prix Title Sponsor, Toyota, left Torrance, California for new corporate digs in Plano, Texas and dropped its support of the celebrity race, a fundraiser that's been a part of the annual event for 40 years!

Long Beach Grand Prix is an annual car race launched in 1974, and since that time has raised the bar each year on exciting, nail-biting car racing. The roads are shut down and the event takes place on the streets of downtown Long Beach where bleachers are placed throughout the route so spectators can watch this amazing festival of color, sight and sound.

The Grand Prix Association of Long Beach, WC Vision and SCCA Pro Racing added World Challenge Championships as part of the  Grand Prix of Long Beach for what was called  Roar by the Shore.

Over 170,000 attend and see six racing events at the Grand Prix of Long Beach, headlined by the IndyCar Series. Also included during the race weekend is the American Le Mans Series, the popular Toyota Pro/Celebrity Race, Indy Lights and drifting.

Part of the race course includes the scenic Long Beach harbor where the Aquarium of the Pacific is located.

Held in conjunction with car races are vendor expos, concerts and a jam-packed Pine Avenue scene each night as those who attend pour onto the streets of Long Beach for dining, dancing and entertainment.