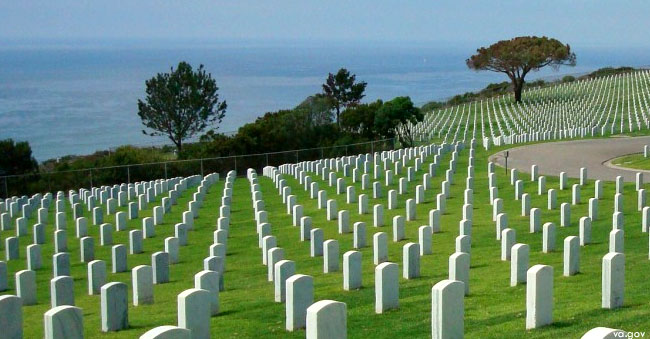 NOTABLE PERSONS: Charles Napier, character actor known for his granite jaw and toothy grin. Born April 12, 1936, in Mount Union, Ky., he served in the Army before earning a bachelor's degree in art in 1961 from what is now Western Kentucky University. He died at the age of 75 and was interred at the Bakersfield National Cemetery on Oct 13, 2011; Section A, Row D, Site 13.

NOTABLE PERSONS Lee R. Scherer, Jr., received a commission from the U.S. Naval Academy in 1942. In World War II flew aircraft carrier-based fighter planes. He first worked with NASA in the 1960s while on active duty with the U.S. Navy. He retired from military service with the rank of captain in 1964. Trained as an aeronautical engineer, Scherer was director of NASA's Armstrong Flight Research Center in 1971-75, and subsequently became director of the Kennedy Space Center. He managed the unmanned Lunar Orbiter Program from inception to completion in 1967, and the scientific aspects of lunar explorations during the Apollo Program, 1968-72. Scherer died May 7, 2011 (Section 7, Grave 186).