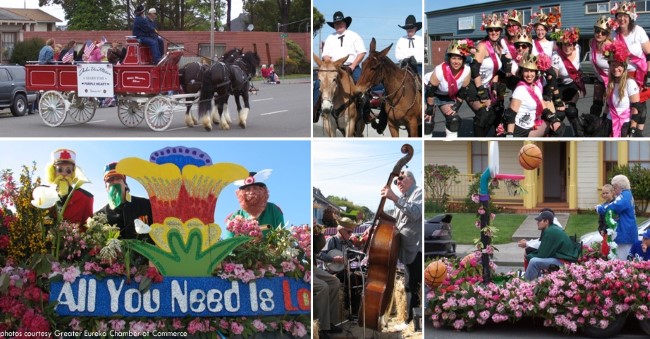 Parade route: starts at 7th at E Street, turns right on H Street, right on Henderson to Eureka Mall where it ends.

Other activities throughout the day include:

Rhododendron Parade is sponsored by Old Town Rotary Club, The Greater Eureka Chamber of Commerce, and several organizations. It is held the last weekend in April. The parade and festival is a region-wide event coordinated through the efforts of several local clubs and their members. Any individual, organization, or business may participate. Entries (except mounted horse entries, antique cars, drill teams and bands or entries for which decorations and other costumes are impractical or defeat the purpose of the entry) are decorated over one quarter of the vehicle, if not a float, to participate in the parade. They are decorated with rhododendrons, other natural flowers, grasses, ferns, vines, and other types of vegetation. Artificial decorations are also used.

The rhododendron plant grows abundantly in the moist climate (over 40 inches of rain on average, annually) and is a natural to celebrate. The plant is easy to cultivate on the West Coast as far south as San Francisco.

Rhododendrons and azaleas belong to the genus Rhododendron of the heath family which includes heaths and heathers, blueberries, mountain laurels and several other ornamental plant groups.

Red and pink rhododendron blooms on the North Coast are on view at Eureka's Rhododendron Parade. The whole town comes out to watch a festival of floats and marching bands parade by as they pay homage to the rhododendron.