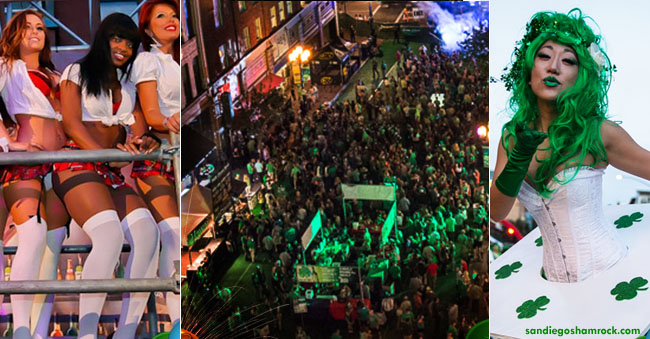 Don your green and become Irish for the day as you enjoy the hottest line up outside of Dublin on The Field Main Stage. sham ROCK is bringing together top Irish rock and punk bands along with Irish step dancing guaranteed to have everyone on their feet.

Between sets you can dance to the DJ's tunes as they spin the hottest house and dance beats! Looking to find the famed pot of gold? Follow the traveling rainbow and caterpillar across the rolling hills of Ireland to one of the two DJ stages to jiggy with it to the hottest national and local DJs. Everyone will be lost in the Irish haze as the Electronic Ireland stage unveils itself, usually on Fifth Avenue and F Street to rock the block! To check out San Diego's favorite local DJs make your way over to the 150' long Whiskey Irish Pub.

Dublin will have nothing on our pub, which will have lots of Miller Lite BEER and plenty of Jameson Irish Whiskey to concoct any of your favorite St. Paddy's Day libations. Your senses will be stimulated as 18 of the hottest go-go fairies dance above the bar with a mixed in river dancing performance to bring you back to Old Ireland.

sham ROCK  takes place in the Gaslamp, usuallly held on F Street between 5th and 7th Avenue's and 6th Avenue between G and E Streets. The main entrance is located at 5th and G Street, which has served as the gateway into a celebration of green for over a decade

In addition to the shamROCK festival, there's also a wonderful St. Patrick's Parade & Festival held annually at Balboa Park during the daylight hours, providing a great alternative for family celebrations.