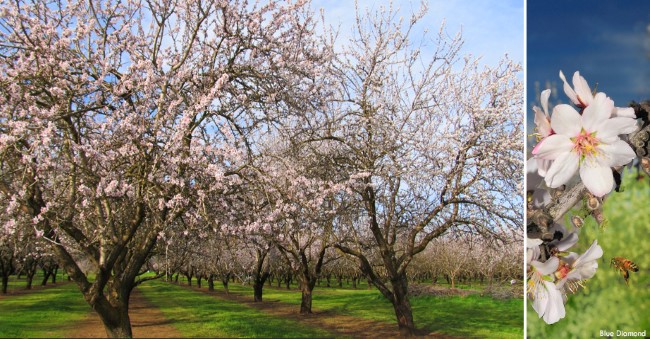 California's third commodity is almonds, just under and milk #1, and grapes #2.

Kern, Fresno, Stanislaus, Merced and Madera were the leading counties. These five counties had 72% of the total bearing acreage.

When I get hungry, I grab the 1 pound bag of almonds and begin snacking. Perhaps I overdo it, but there's nothing quite as tasty. California is U.S. leader in growing almonds. If you can get them fresh from the farmer's market or store, there's no need to head for the farm--maybe. California's almond growers set up road stands seasonally and sell direct to the public in many locations of the Central Valley. Once you've tried the fresh picked almonds, your life may be forever changed. The soft, buttery taste of fresh picked almonds is unlike anything you've tried. I'm an almond fan and I eat mine mostly plain. However, almonds are used in gourmet dishes, are added for texture, flavor, and can be processed into paste for pastries and desserts.

100 AD: The Romans showered newlyweds with almonds as a fertility charm. There are documented findings that nutmeats and dried fruits were treated as delicacies of the time, as the cultivation of these foods was not very prevalent.

# 1900 AD: By the 1870s, research and crossbreeding had developed several of today's prominent almond varieties. By the turn of the 20th century, the almond industry was firmly established in the Sacramento and San Joaquin areas of California's great Central Valley.
# 2000 AD: In the past 30 years, California's almond yield has quadrupled. More than half a million acres in the lush San Joaquin and Sacramento valleys are under almond cultivation, stretching 400 miles between Bakersfield and Red Bluff, California. The modern industry of today reveals a different look at almonds. Now focused on highly advanced methods of production sorting, hulling and processing, the industry still maintains its down-to-earth goodness invoked by this simple nut.
# Today: Almonds are California's largest tree nut crop in total dollar value and acreage. They rank as the largest US specialty crop export, as well as the top agricultural export of the state of California.

Curried Chicken Salad created by: Ellie Krieger cookbook author, "So Easy: Luscious Healthy Recipes for Every Meal of the Week"

Toast the almonds in a small dry skillet over medium-high heat, stirring occasionally, until fragrant and beginning to turn golden, 2 to 3 minutes. In a large bowl, stir together the yogurt, mayonnaise, and curry powder. Fold in the chicken, grapes, and cilantro and season with salt and pepper. This salad will keep in an airtight container in the refrigerator for up to 3 days. To serve, put a scoop of the chicken salad on a bed of greens on a plate or in a to-go container and sprinkle with the toasted almonds. Add a lemon wedge to squeeze over the greens just before eating. Serve with pita chips, stored in a separate container, if packing.