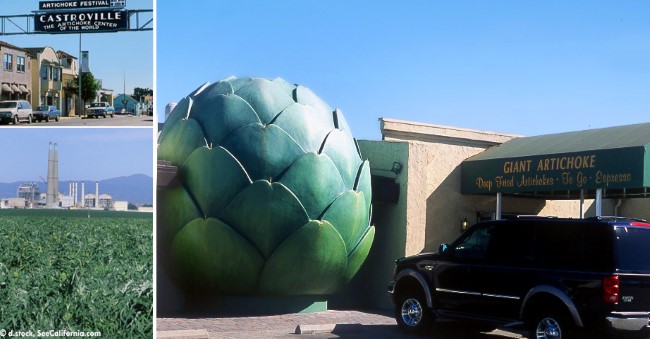 The World's Largest Artichoke: The World's Largest Artichoke is a sculpture commissioned in 1963 for a roadside stand and restaurant owned by Ray Bei. Built from concrete and rebar, this giant creation stands 20 feet tall and 12 feet across. Today you can still see the giant artichoke in front of The Giant Artichoke, 11261 Merritt St., Castroville, CA. Phone: 831-633-3501. Stop at one of the artichoke restaurants and dine on some of the biggest artichokes available on the planet!

The "Artichoke Capital of the World" celebrates harvests of the crop with an Artichoke Festival in May.

Where Marilyn Monroe got her start: In 1947 young Norma Jean was crowned Castroville's first artichoke queen. She became known as the famous actress, Marilyn Monroe after this momentous crowning. John Steinbeck used Castroville as the setting for his short story, Johnnie Bear.

Castroville soil and climate create the perfect combination of sun and fog for artichokes and the nation's only artichoke processing plant shown in the distance in the photo is located in Castroville.

Around 75% of the California's total acreage of artichoke crops lies within Monterey County, and California, itself, raises 100% of all artichokes grown in the U.S.