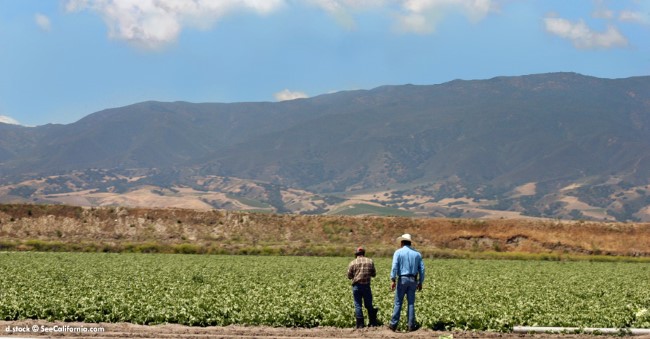 California leads the way as the leading fresh market vegetable producing state, accounting for 43% of the U.S. harvested area, 49% of national production, and 48% of value for the 24 vegetables and melons.

Watermelon crop value moves up and down each year but in recent times its estimated value has been around $83 million.

Who doesn't love the juicy, sweet flavor of a fresh summer watermelon, dripping with delight? The flavorful, colorful vegetable (member of zucchini family) is a popular favorite at picnics and casual outings but has been integrated into buffets, reception trays and the melon, itself, is ideal for carving much like a pumpkin. Californians love their melons and they consume tons of it, especially at watermelon festivals and events. Well, maybe they produce at least a ton of it, along with the Western region states and Mexico combined. California has aligned itself in a marketing effort under the hat of the Western Watermelon Association. The organization encompasses the states of Arizona, California, Nevada, New Mexico, Utah, Idaho, Oregon, Washington, Hawaii, and the country of Mexico.

Egyptians had watermelons 5,000 years ago and then shared them with the rest of civilization in the 10th century, but the watermelons had to come from somewhere before they had them. Nevertheless, this is not a new food source but has been around through recorded history of Planet Earth. In ancient times travelers used watermelons as a replacement for water, and today if you were in a bind, that watermelon would quench your thirst just the same as it did back then. Why? Watermelons are more than 90% water.

Watermelon Recipes - Here are a few watermelon recipes ranging from a 4th of July desert cup, to a watermelon cocktail made with Vodka, and a light and spicy watermelon salad using jalapeno.

California produces approximately 330,000 tons (302 T) of watermelon per year (1.95 million for the United States. Recent average gross has been around $83 million. Limited supplies of California watermelons are available beginning in May. Production peaks in August, and the season ends in November. Most California watermelons are marketed in the western United States and Canada. Major competition in the market comes from Mexico, Arizona, and Texas.

Seeded (Diploid) Varieties include Sangria and Fiesta, popular All-Sweet hybrids that are oblong and dark green with broken, light green stripes. The flesh is bright red with black seeds.

Calsweet, the most popular open-pollinated variety, has striped skin and red flesh. Also grown is the hybrid Royal Sweet, with striped skin and dark pink flesh. Sultan is an early-maturing, high-yielding hybrid.