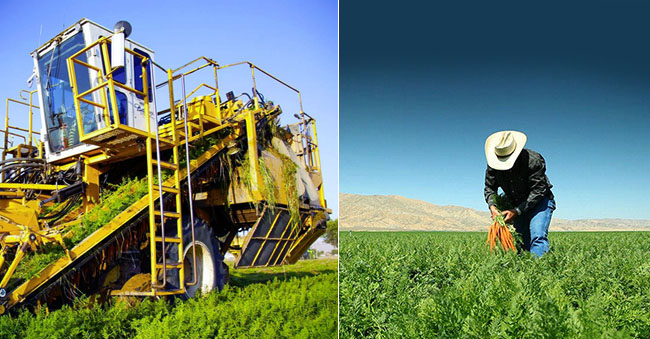 California accounts for about 85% of all the fresh market production. One city, Holtville, calls itself the Carrot Capital and celebrates each year with Holtville Carrot Festival. The carrot or Daucus carota is grown year-round in California, the top fresh carrot producing state. Michigan and Texas come in a distant 2nd and 3rd in crop yields.

Carrots are also shipped from California year-round, with highest shipments from December to August. Major carrot imports come from Canada and Mexico.

Statewide, California farmers produce about 62,000 acres of carrots with approx. one-quarter of that grown in the Imperial Valley. In recent years, carrots have ranked 17th among California's top 20 livestock and crop commodities, valued at nearly $500 million, according to the U.S. Department of Agriculture.

On the central coast, they are planted from December to August for harvest from April to January.

Consumer demand for uniform roots of deep orange color has led to extensive use of Imperator-type hybrids. Varieties for the cut and peel market include Sugarsnax, Topcut, Primecut, Trinity, Imperial Cut, and Tastypeel.

Some of the major producers in California also use their own proprietary varieties. Nantes-type varieties, commonly grown in Europe and in home gardens, are not normally grown commercially in California. There is a growing interest by producers in other colored carrots such as reds, yellows, and purple, and these are beginning to be grown on a larger scale. Carrots are always direct seeded. Both raw and pelleted seed are used.

Carrots are then hauled to a shed for washing, grading, sizing, and packing. In the Central Valley, carrots are hauled a short distance, usually to sheds in Bakersfield, whereas carrots grown in the desert may be hauled over 300 miles (480 km). The grower pays part of the freight to the shed. On average, 40 to 80 percent of all the carrots growing in the field are harvested and packed out. Carrots that are damaged by the harvester or by insects or are diseased, deformed, or off-color are culled.

In the United States, carrot production is highly mechanized and highly concentrated. Both carrots used for processing and fresh carrots use mechanical harvesting techniques and only two major California firms account for the majority of all carrot products sold. Those companies, both of which have been in the carrot-production business for more than 30 years, are Grimmway Farms and Kern Ridge Growers. Grimmway contracts with 13 growers in the Imperial Valley and farms its own carrots in the area. Between February and May, as many as 225 truckloads per day leave the valley for Grimmway's production line in Bakersfield.

Carrots are a root crop planted approx. 1/2" deep into the soil. Seeds germinate in 7 days. Harvest Carrots are ready to harvest 50 to 85 days after planting. They are machine harvested by mowing the tops then lifting the roots with a modified sweet potato harvester, or by loosening the soil with a specialized plow (carrot lifter) which harvests the crop in one pass.

Carrots are a member of the parsley (Unbelliferae) family, which also includes celery, anise and dill. Carrots are thought to be native to central or western Asia (likely Afghanistan). Cultivated carrots first arrived in North American with the early Virginia colonists. In early history, carrots were used to cure a wide range of conditions.

Carrots contain beta-carotene, an antioxidant effective in fighting some forms of cancer, especially lung cancer. Current research suggests that it may also protect against stroke, and heart disease. A 1/2 cup serving of cooked carrots contains four times the recommended daily intake of vitamin A in the form of protective beta-carotene. Carrots are also a very good source of dietary fiber, vitamin C, vitamin K, folate and manganese, and a good source of vitamin B6, pantothenic acid, iron, potassium and copper.

The United States was the third largest producer of carrots, just behind Russia. Both distantly followed China, which produced 34% of the world's carrots.