Rare Hoshigaki Made in California 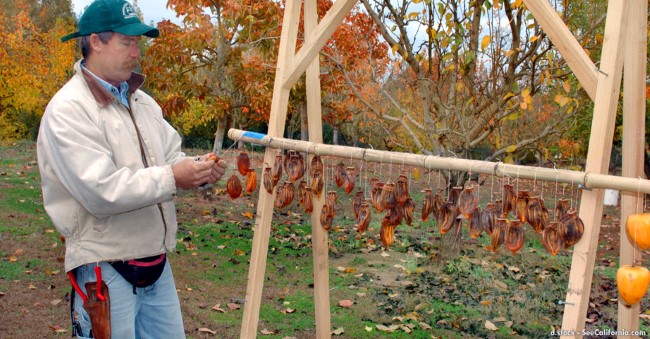 
One of the most amazing foods I've ever witnessed as it was produced is the highly sought out and rare Hoshigaki, made in California's Sierra Nevada foothills by farmers rekindling the lost art. It's nothing less than a labor of love, and just watching it being made helps to explain why the fruit costs more than other types sold at exclusive farmers markets in Santa Monica and elsewhere.

Persimmons are an odd fruit often ignored in the culinary world. But once processed, the dried, sugar-concentrated version of a persimmon can become as rare as gold. Several farms in Placer County grow persimmons and make the dried snack or dessert that is given as gifts.

Unlike other dried fruits that tend to be brittle and leathery, hoshigaki's succulence and concentrated persimmon flavor is heavenly smooth and soft. The hoshi gaki method is traditional to Japan, and came to America with Japanese American farmers.

Penryn Orchard Specialties creates an amazing Tsurunoko or chocolate persimmon grown and sold, though we've not seen it on their recent list...just ask. It is named for its properties that include release of small amounts of alcohol from the seeds in a chemical reaction causing the tannins in the flesh to turn brown, creating a rich flavor and color reminiscent of the characteristics of chocolate.

If not produced with extreme care can be tangy and tart, and can ruin sales of this specialty crop, but done right, it is really sweet when previously pollinated so that seeds are produced.

To be eaten fresh, the Hachiya persimmon must be completely soft, otherwise it is unbearably astringent. For drying, however, the fruits are perfect when they are still firm like apples, which generally happens from the end of September to the middle of October. The riper they are, the more delicately they must be handled.

Making hoshigaki requires dexterity, patience and ample amounts of monitoring. The process involves peeling the persimmon, and then hanging the fruit, several on a string or over a pole. After hanging the fruit for 3 to 7 days, the persimmon forms a skin that needs to be massaged in order to break up the hard inner pulp. The massage process goes on every 3 to 5 days for three to five weeks! By the end of this lengthy process, the sugars eventually come to the surface of the fruits, leaving a white bloom. The hoshi gaki are fully done when the pulp sets and you can no longer roll it.

Hoshigaki can be found at farmers markets from November through the Holiday season in California. The product remains scarce and hard to find beyond the area of immediate production, but one Placer County farmer, Jeff Rieger, is scheduled to begin selling hoshigaki at the Santa Monica Farmers Market this fall.

About the photo above: It was the mandarins that hooked Jeff Rieger, owner of Penryn Orchards. He lived near Lake Tahoe, first skiing, then painting houses, then building them on speculation. When Rieger and his girlfriend at the time bought a 4.3-acre property in Penryn, in the Sierra foothills northeast of Sacramento, in November 2002, he intended to fix up the house and flip it for a profit. But the owner had left the crop of satsuma mandarins on the trees, and Rieger started picking them and bringing them to a local store. Soon he split with the girlfriend and fell in love with the farm, which he named Penryn Orchard Specialties.