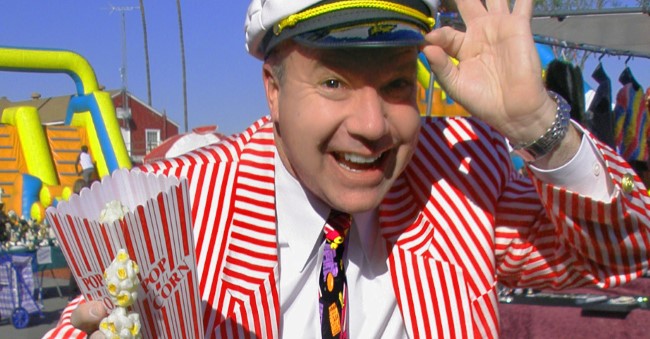 Varieties of popcorn are grown to pop into two distinctive shapes: "snowflake," the large popcorn sold in theaters and ball parks; and mushroom, the smaller variety used in popcorn candies and snacks. The corn you see growing during the summer throughout the Midwest is probably field corn, also know as dent corn. Millions of acres are planted each year as compared to (roughly) 200,000 acres of popcorn and (roughly) 100,000 acres of sweet corn. All three types of corn have very specific uses.

More than 17 billion quarts of popcorn are consumed by Americans every year, according to industry analysts. About 58 quarts are eaten by the average American.

Compared to most snack foods, popcorn is low in calories. Air-popped popcorn has only 31 calories per cup. Oil-popped is only 55 per cup.
Popcorn is a type of maize (or corn), a member of the grass family, and is scientifically known as Zea mays everta.
Of the 6 types of maize/corn—pod, sweet, flour, dent, flint, and popcorn—only popcorn pops.
Popcorn is a whole grain. It is made up of three components: the germ, endosperm, and pericarp (also know as the hull).
Popcorn needs between 13.5-14% moisture to pop.
Popcorn differs from other types of maize/corn in that is has a thicker pericarp/hull. The hull allows pressure from the heated water to build and eventually bursts open. The inside starch becomes gelatinous while being heated; when the hull bursts, the gelatinized starch spills out and cools, giving it its familiar popcorn shape.
Most U.S. popcorn is grown in the Midwest, primarily in Indiana, Nebraska, Ohio, Illinois, Iowa, Kentucky and Missouri.
Many people believe the acres of corn they see in the Midwest during growing season could be picked and eaten for dinner, or dried and popped. In fact, those acres are typically field corn, which is used largely for livestock feed, and differs from both sweet corn and popcorn.
The peak period for popcorn sales for home consumption is in the fall.
Most popcorn comes in two basic shapes when it's popped: snowflake and mushroom. Snowflake is used in movie theaters and ballparks because it looks and pops bigger. Mushroom is used for candy confections because it doesn't crumble.
Popping popcorn is one of the number one uses for microwave ovens. Most microwave ovens have a "popcorn" control button.
"Popability" is popcorn lingo that refers to the percentage of kernels that pop.
There is no such thing as hull-lessö popcorn. All popcorn needs a hull in order to pop. Some varieties of popcorn have been bred so the hull shatters upon popping, making it appear to be hull-less.
How high popcorn kernels can pop? Up to 3 feet in the air.
The world's largest popcorn ball was created by volunteers in Sac City, Iowa in February, 2009. It weighed 5,000 lbs., stood over 8 ft. tall, and measured 28.8 ft. in circumference.
If you made a trail of popcorn from New York City to Los Angeles, you would need more than 352,028,160 popped kernels!

According to the latest Census of Agriculture (Census) data, domestic production of popcorn totaled over 996 million shelled pounds in 1997. Popcorn is grown in 25 States. According to the Census, the top five major popcorn-producing States in 1997 were Nebraska (27 percent), Indiana (21 percent), Illinois (13 percent), Ohio (9 percent), and Missouri (6 percent).

U.S. exports of popcorn totaled 206 million pounds in 1999 (down from 219 million pounds in 1998), with a value of $58 million (down $8 million from 1998). Popcorn was exported to over 90 countries. The two largest export markets in 1999 were Mexico (with 17 percent of the poundage exported) and Canada (with 14 percent). Other major destinations for U.S. popcorn included Sweden, the United Kingdom, Germany, Spain, Italy, Thailand, the Republic of Korea, Denmark, the Philippines, and Japan.

Nearly all of the world's popcorn production is in the United States, and imports are usually minimal. In 1999, only 0.3 million pounds were imported from all countries. Normally, small amounts are imported from Canada and Argentina

# Popcorn is a type of maize (or corn), a member of the grass family, and is scientifically known as Zea mays everta.
# Of the 6 types of maize/corn—pod, sweet, flour, dent, flint, and popcorn—only popcorn pops.
# Popcorn is a whole grain. It is made up of three components: the germ, endosperm, and pericarp (also know as the hull).
# Popcorn needs between 13.5-14% moisture to pop.
* In 1945, Percy Spencer discovered that when popcorn was placed under microwave energy, it popped. This led to experiments with other foods, and the birth of the microwave oven.

Why Popcorn Pops
Each kernel contains a small drop of water inside a circle of soft starch surrounded by the hard outer surface. As the kernel heats, the drop of water expands and pressure starts to build up. When the hard surface eventually gives way, the popcorn explodes. During the explosion, the soft starch inside the kernel inflates and bursts, turning the entire kernel inside out.

Popcorn is a whole grain food which makes it a high-quality carbohydrate source that is not only low in calories, but high in fiber. This means it takes longer to chew and makes you feel full longer.

1. One of the earliest methods of popping popcorn involved:
a. Wrapping kernels in layers of animal fat and placing in a clay pot over an open flame
b. Placing kernels in a covered pot in the hot sun to warm for several hours
c. Wrapping heated stones and kernels together in an animal skin
d. Mixing unpopped kernels with extremely hot sand

2. Zea Mays Evertaö is what?
a. The motto (in Latin) of Popcorn University meaning Long Live Popcornö
b. Popcorn's scientific name
c. The name of the woman who discovered popcorn
d. What Native Americans used to call popcorn

10. If you dry kernels of sweet corn, they will pop just like popcorn when heated.
a. True
b. False
11. Popcorn is aà
a. Carbohydrate
b. Fiber source
c. Whole grain
d. All of the above

11. In 1945, an engineer named Percy Spencer used popcorn in his efforts to develop the:
a. Television
b. Popcorn popper
c. Microwave oven
d. Air freshener

Answers
1. d (Supposedly, this method is still used in India today. Surprisingly, the sand doesn't stick to the popcorn. A little shaking and it's ready to eat.)
2. b
3. a
4. d
5. b
6. d (On average, popped popcorn takes up
37 times more room than unpopped popcorn. If you covered the state of Oregon with a layer of kernels and then popped them, it would cover the entire United States.)

7. a (Ella and her husband, John Harvey Kellogg, both thought popcorn was an excellentö food and easily digestible and to the highest degree wholesome, presenting the grain in its entirety, and hence superior to many denatured breakfast foods which are found in the market.)

8. c (The three most common are dent/field, sweet, and popcorn. Flint, also known as Indian corn, and pod are commonly used as decoration.)

9. b (Without this amount, popcorn will not pop.)

10. b (The hull of sweet corn is too soft and would not withstand the pressure of being heated long enough to allow the corn to pop.) 1

12. c (After WWII, Spencer was looking for ways to use microwave technology. He supposedly had a chocolate candy bar in his pocket which melted during his experiments with microwaves. On a hunch, he took popcorn kernels, placed them in the microwaves, and watched them pop. The rest is history.)

13. a (Popcorn is low in fat and calories, contains no artificial colors, preservatives or added sugar. Even oil popped popcorn contains only 55 calories per cup.)

Although evidence of popcorn (Zea mays everta) seeds has been discovered in ancient ruins, the development, production, and use of popcorn is generally a product of the United States. Popcorn was produced by early Native Americans, and most of the world's popcorn is produced in the United States. Popcorn has become one of the most popular U.S. snacks.

Early varieties of popcorn can be traced back thousands of years. North American explorers observed Native American tribes eating popcorn and using it in necklaces and headdresses. European settlers served popcorn as a breakfast cereal with milk or cream. However, popcorn did not become commercially popular until the Great Depression because it was a low priced snack. During World War II, much of the U.S. sugar supply was diverted to the war effort. Hence, candy manufacturing was greatly curtailed, and popcorn was used as a substitute by many consumers.
Demand

The Popcorn Board Statement on Biotechnology

There is no genetically modified popcorn (kernels) currently available for sale in domestic or international markets. Research and development of popcorn varieties derived from modern biotechnology could be available in the future.