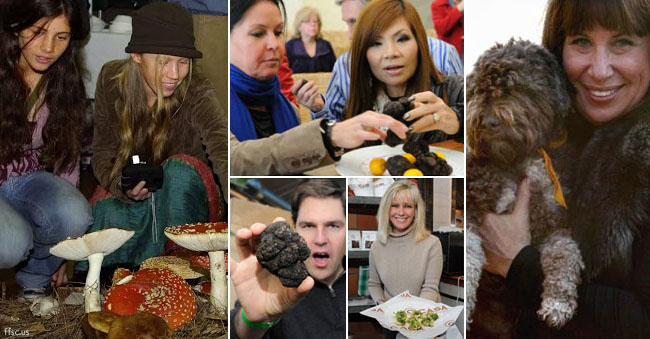 Truffles are ectomycorrhizal fungi usually found in close association with the roots of trees. Spore dispersal is accomplished through fungivores, animals that eat fungi. A truffle is the fruiting body of a subterranean Ascomycete fungus, predominantly one of the many species of the genus Tuber. The French black truffle and the Italian white truffle are rare and have to be excavated deep within the dirt like a potato.

Truffles are fungi found by trained pigs or the Italian Lagotto Romagnolo dog breed recognized for sniffing out truffles. Aromatic, slightly musty with earthen flavors, this tuber is used sparingly as a food accent or spice.

In California farmers are embarking on efforts to grow truffles -- the states of Oregon and Washington have seen some success in truffle growing.  The desire to use truffles in dishes is immense in California, as evidenced by the annual Napa Truffles Festival.

There are several types of truffles generally categorized as white or black. The flavor of black truffles is far less pungent and more refined than white truffles. Their strong flavor is often described as syrupy sweet. Black truffles also are used for producing truffle salt and truffle honey.

The black Périgord truffle (Tuber melanosporum), is named after the Périgord region in France where it grows in shady areas with oak and hazelnut trees. Black truffles are harvested in late autumn and winter.

In Italy they have truffle hunts where truffle lovers worldwide join together and dig in the dirt to find their beloved truffles and then have a festival afterward to celebrate their finds.

The reason why they are usually referred to as a mushroom is because they are a fungus much like a mushroom and are found in the woods; However mushrooms are a type of fungus that grow above ground and truffles are subterranean which is they are not technically mushrooms.