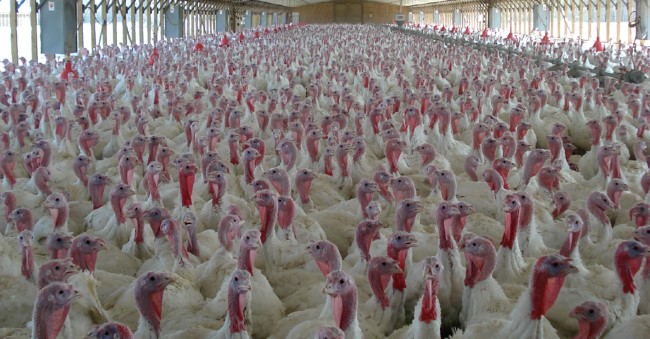 As you prepare for you Thanksgiving Dinner "stuffed with meaning", you can digest a few tidbits and snacks about California's turkeys. California doesn't rank as the top turkey producer in the U.S., though at one time it probably did. Minnesota gets the honors and because the National Turkey Federation president this year comes from Willmar, Minnesota, it's looking fairly sure that he'll pick the presidential pardon turkey from his own state. Last year it came from California. From time to time pardoned turkeys are sent to Disneyland to live out their days at the small petting zoo near Big Thunder Ranch. When last year's turkey from California was set to be pardoned, an animal rights group lobbied to have the turkey sent to a animal rescue farm. The group didn't get their wish, however, and this year the turkey is destined for Mt. Vernon like so many before it.

California actually ranks 6th turkey producing state in the U.S.
If you eat turkey or chicken in California, there's a good chance your fowl comes from Zacky Farms of Fresno or Foster Farms of Livingston.
George H. W. Bush formalized the turkey pardon in 1989. Before that, the turkey was eaten at the White House.
Turkey candidates for presidential pardon are trained to be comfortable around people.
More than 226 million turkeys were consumed in the United States in 2010. 46 million of those turkeys were eaten at Thanksgiving, 22 million at Christmas and 19 million at Easter.
Approx. 736 million pounds of turkey were consumed in the United States during Thanksgiving in 2010.
Nearly 88% of Americans surveyed eat turkey at Thanksgiving.
The average weight of turkeys purchased for Thanksgiving is 16 pounds.
White meat is generally preferred in the United States while other countries choose the dark meat.
A turkey typically has about 70 percent white meat and 30 percent dark meat.
For anyone who lives near a poultry farm, you can attest that there's a distinct smell that permeates the air. It's not particularly refreshing either. When Petaluma, Calif. produced the most eggs in the U.S. and wore the title of Butter & Eggs Capital which is still celebrated, you could smell the poultry business in the air for miles! It's a stinky smell, though many who live on farms or nearby say they hardly notice it. A song written & performed by the late Frank Zappa immortalized California turkey farm experiences:

VILLAGE OF THE SUN