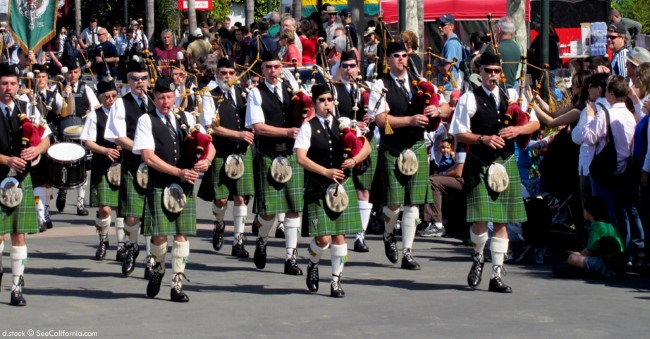 
Robert Burns Supper -- Celebrate Scotland's best-loved bard, Robert Burns, with a traditional Burns Supper including haggis, whisky, traditional Scottish music and dancing in the Queen's Salon aboard the World-Famous Queen Mary. Hosted by the formidable John Hannah, the supper experience includes a complimentary cocktail, the piping of the haggis, a traditional four-course dinner and all the Scottish entertainment imaginable.

ATTRACTION: Aquarium of the Pacific in Long Beach is one of the nation's premier ocean aquariums. Don't stand in line and wait! Get your tickets here!

Queen Mary Scottish Festival was established in 1993. It is one of the most unique and enjoyable settings for such a festival. Set to the backdrop of the majestic Queen of the Seas, Queen Mary, the event is held on the lush grass lawns overlooking the ship and Long Beach harbor. From the venue you can see the Long Beach skyline across the bay.

Grand Parade of Clans & Bands with an Address to the Haggis. 9 a.m. - 6 p.m. daily, festivities include Border Collie sheep-herding, firing demonstrations, performances by the Scots Greys Calvary, Royal Scottish Country Dance Society, and historic re-enactments in ode to the Queen Mary's Scottish legacy. Forty members of the US Marine Corps Pipe Band are set to perform a traditional hymn with the LA Scots Grade 1 Pipe Band, the premier pipe band in the United States.

Bagpipes and brogues at the Queen Mary Scottish Festival, ring in the air with an amazing sound as thousands gather to participate in Scottish heritage with music, marching bands, challenging games such as Hammer Throw, Putting the Stone and Tossing the Caber. Cultural events take place both outdoors and on the ship.

While highland dancing on board the ship is great, outside there are pens filled with sheep that kids can pet. Suddenly the dogs surround them and a demonstration of sheep-herding runs up and down the field among the guests watching.

Queen Mary ship has a connection with Scotland, in case you didn't know. She was built on the banks of the River Clyde in Scotland over 75 years ago. Now retired to a permanent harbor berth, the ship is a mecca for entertainment and events, dining & a hotel.

The Scottish Highland athletics competition with men's and women's events in the Queen Mary Dart Tournament, continuous dance and musical performances including Highland Dance, piping and drumming competitions; whiskey tastings and plenty to see and do, all make this a family-friendly event for all ages and cultures.

For more information, call the Queen Mary at (562) 499-1771 or visit queenmary.com. Tickets are available online and by phone