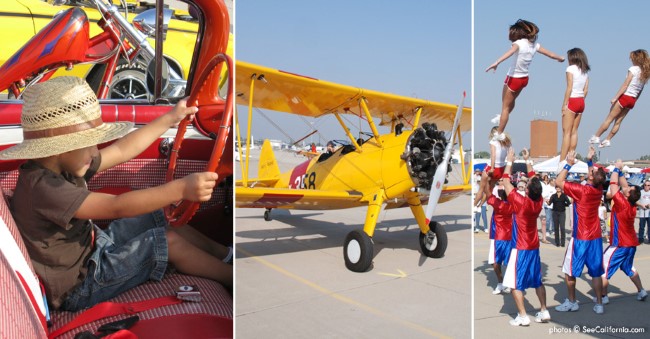 The annual Wings, Wheels and Rotors Expo was canceled in 2017 when Los Alamitos Chamber organizers couldn't reach agreement with California Military and National Guard, which manages Joint Forces Training Base where the event has been held, attracting 35,000 people. In 2015 Joint Forces Training Base prohibited aerial activities after allowing them for 13 years. In 2017 event planners were told they could no longer charge $40-60 car show entry fee, and could not rent space to sell retail merchandise such as T- shirts. Only food vendors would be allowed. The free admission expo costs approx. $80,000 to produce with costs partially offset through vendor  and car show registration fees.

Wings, Wheels And Rotors annual festival of craft & cars is one of the best free events in Southern California during October weekend. Classic and military craft (some that you can go inside), collector & classic cars, cheerleaders from major ball teams, dignitaries, vendor booths, food booths and musical entertainment all make for a day of free fun.

Not limited to ground touring of some of the big aircraft, you can look to the sky to see aerial displays, as well. On the ground there are vendor booths, food, beverages, stage entertainment and a really fun time for all.

Located in one of the most congested and heavily flown airspace in the U.S., Los Alamitos Control Tower is one of the busiest in Southern California, also managing five instrument approach procedures including radar.

Los Alamitos was used as the assembly area for the L.A. riots, the Northridge earthquake, the 1984 Summer Olympics, and a variety of emergency preparedness exercises.

Los Al has been designated the disaster support area for Southern California.

The JFTB is home to the headquarters of the 63rd Regional Support Command (RSC) and home to the California Army National Guards 40th Infantry Division (Mechanized).

Over 700 military, civilian and contract personnel are assigned at Los Alamitos on a full time basis to support training, operations and services.

Almost 3000 traditional guardsmen and reservists conduct training at the AFRC as well.

Annual open house and family event sponsored by the Los Alamitos Area Chamber of Commerce and the California National Guards Joint Forces Training Base (JFTB) All the activities will take place on the flightline on Los Alamitos Army Airfield (KSLI) Los Alamitos Army Airfield is the last remaining military airfield in the greater LA/Orange County areas with the longest runways in the OC. The JFTB is also the disaster support area for S. California. On display will be military aircraft, helicopters, many cars, warbirds along with public safety, first responder and military equipment .Aircraft flyovers are planned including aircraft static displays. Wings Wheels & Rotors will have various civilian and public safety helicopters with fire, police and military rotorcraft including some of the media aircraft seen daily on the air around SoCal. Helicopter awareness will be supported by the Professional Helicopter Pilot Association (PHPA) Along with the airplanes and warbirds are helicopter flights in civilian "choppers" for a small fee. Also free flights in general aviation airplanes by the Experimental Aircraft Association Young Eagles for youth between the ages of 8 and 17 years who are interested in flying and aviation. The largest event will be a huge car show including custom cars, new autos, motorcycles, roadsters, antique vehicles and hot rods. Awards to be presented for best cars. There will be many events for the family, food, including breakfast, music, vendors, displays, demonstrations, flybys and other activities. Open to the public. Picture I.D. required to enter the base