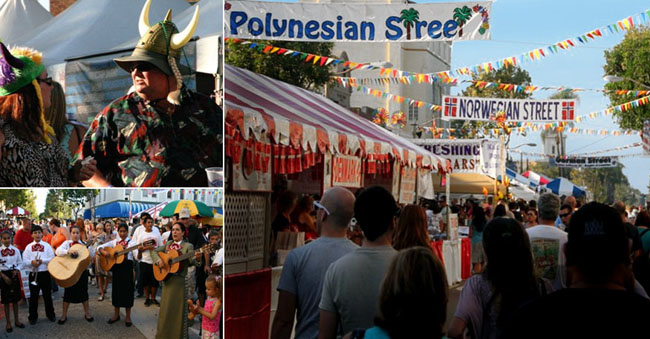 Cost: There is no entrance fee to the street fair. However, Ethnic Streets, Arts and Crafts and Children's Street set their own fees and rates for participating in the Fair.

ORANGE, CALIF. -- Orange International Street Fair (orangestreetfair.org) on Labor Day Weekend is a multi-cultural event which was designed to allow a variety of clubs and organizations to earn money through sales by each getting their own booth that they operate independently. Each year the concept is basically the same -- 15 ethnic streets ranging from Norwegian to Polynesian, Spanish to German, contain stages with music, and scattered throughout the venue are 40+ food & alcohol booths run by local non-profits.

Alcohol sales on most streets

The event is quite popular and also crowded. Be prepared as the Labor Day Weekend is often hot. Keep the kids hydrated (and yourself). If you buy beer and similar beverages, be sure to also drink water if the temps are high.