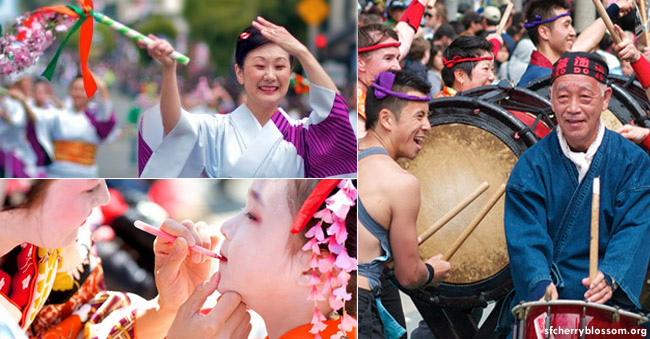 SAN FRANCISCO, CALIF.--The Northern California Cherry Blossom Festival is the second largest festival outside of Washington, D.C. to celebrate the blooming of cherry blossoms; and held at one of three remaining Japantowns in the United States. The event in San Francisco includes a Queen pageant, a parade, and two weekends of festival celebrations.

The Northern California Cherry Blossom Festival turned 50 in 2017. Recognized as one of California's most prominent celebrations of Asian traditions, more than 200,000 attend the event each year to see the color and grace of the Japanese culture and the diversity of the Japanese American Community. Hosted in San Francisco Japantown, the festival takes place on Post Street between Laguna and Fillmore Streets. The Grand Parade, food booths, cultural performances, martial arts, live bands, the annual Queen Program, and more.

Japanese classical Buyo and folk dance Minyo groups representing the Bay Area perform throughout the parade route like floating butterflies. World renowned San Francisco Taiko Dojo create a thundering sound of the taiko, and the newly-crowned Queen and her Court cascade their way to Japantown.

Anchoring the parade is the exciting Taru Mikoshi, that will be hoisted by over one hundred strong individuals from throughout the Bay Area. Streams of colorful floats represent Japanese American and other Asian communities, Boy Scout Troops from the Japanese American communities will march proudly along the streets and pretty young women will ride many of the floats in the parade.

Other San Francisco Festivals you may want to check out include: