Santa Cruz Woodies on the Wharf 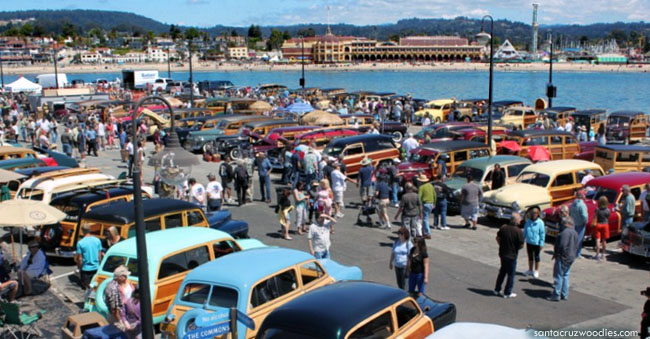 Schedule (tentative)
10 a.m. - 3:30 p.m. Woodies parked on the Wharf
Activities throughout the day include music, merchandise sales, raffles prizes including beach bikes and surfboards
surfboard shaping
3:30 p.m. The Parade off the Wharf The Parade off the Wharf begins promptly at 3:30 p.m. This is a highlight of the show both for Woodie owners and for the thousands of people who come to the wharf to see the cars.

SANTA CRUZ, CALIF. -- It all began in 1993, according to the official Woodies on the Wharf story. The local Santa Cruz woodie car club wanted to have a show, but they were meeting opposition from the merchants on the pier concerned that they'd lose business as a result of losing valuable parking spaces in front of the shops and restaurants. (Santa Cruz is one of the few piers you can actually drive a car on, but you know that.)

We all need friends, the group found one who helped the get the event launched. It's been a blast ever since, providing great business for the restaurants and shops on the pier, entertaining thousands of guests, and delighting car owners who get to show off their classic vehicles in one location.

If you've purchased a woodie in the past 10-15 years, you'd be pretty stoked right now. Owners are reporting that they're being offered $75k and more for a pristine wood, when just a few years back the cars were fetching half that amount. You don't have to own one to love the classic California icon--the woodie. This weekend you can roll back the clock and enjoy hundreds of woodies in one spot--on the 100-year-old Santa Cruz wharf! Set to the backdrop of the Pacific Ocean, sandy beaches, Cocoanut Grove and famed Boardwalk amusement, the woodies are surrounded by landmarks much older. Woodies date back to the 1930s, with the Woodies on the Wharf event showcasing pre-1952 vehicles.