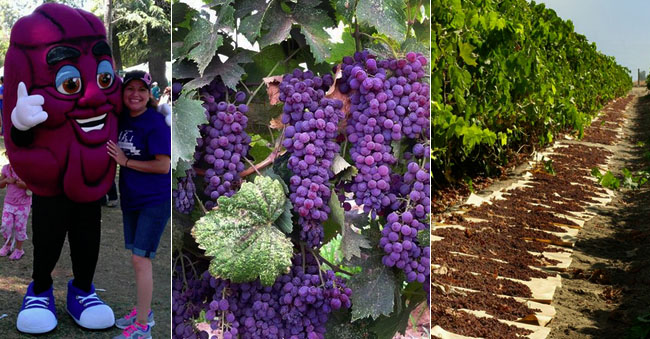 The Raisin Festival carnival will be open

Celebrating the fact that they're the raisin capital of the world!

The Annual Selma Raisin Festival typically includes a carnival, entertainment, and food booths each day. On Friday evening the Raisin Royalty will be crowned. On Saturday there will be art, photography and horticulture exhibits as well as displays of local businesses. For more information call the Chamber office at 559/891-2235

On approximately 200,000 acres, the 3,000 California Raisin growers produce 100% of the U.S. raisins, totaling approximately 350,000 tons annually in an area within a 60 mile radius of Fresno, California – known as the central San Joaquin Valley. Two-thirds of the U.S. raisin production is consumed in the U.S. and Canada, while one-third is exported to nearly 50 countries with Japan and the United Kingdom being the top two export markets.

Raisins are essentially dried grapes of the Vitis vinifera” Natural Seedless varietal type and are typically dried by the sun, whether it is on paper trays or dried on the vine. Natural (Sun-Dried) seedless raisins include the Thompson seedless and other newer cultivars such as Selma Pete, Fiesta and DOVine. California Golden Seedless and California Dipped Seedless raisins are mechanically dried and processed. Other raisin varietal types include Zante Currant, Muscat, Monnuka, Sultana, and other Seedless. Raisins may also be further processed into Raisin Paste and Raisin Juice Concentrate.

Once dried, the raisins are brought from the vineyards, stored in wooden bins, and processed as needed by having their stems and capstems removed, then sorted by size, cleaned and washed in water to assure a wholesome and safe final product.