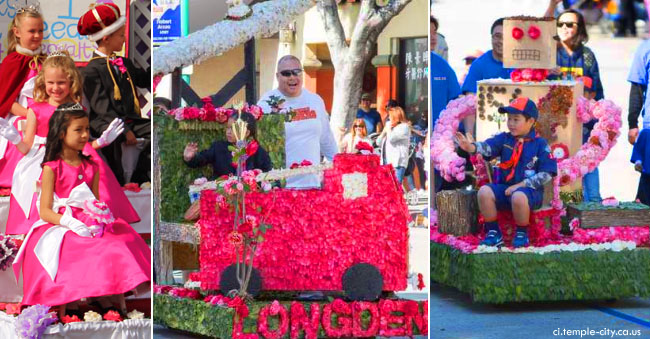 Festival Fun for Everyone is 2020 theme

Just eight miles from Temple City the world-renown Tournament of Roses, Rose Parade offers an annual celebration on a much grander scale, but not that different from the the homespun Temple City Camellia Festival and Parade.

Both events celebrate flowers. Both have parades. Both have princesses. Both feature entertainment over several days. But for locals in Temple City their festival is actually more fun as it features a carnival with rides, games, food booths and all the activities of a fair. Tournament of Roses doesn't have that.

Temple City's festival came about years after the Tournament of Roses was founded. It all started in 1944 with a contest held by the Women's Club of Temple City to choose a flower and a slogan for the community. Mrs. Ralph Saunders submitted the winner, "Temple City Home of Camellias".

Pasadena's festival began in 1890 when the Valley Hunt Club members, led by Charles Frederick Holder, sponsored the first Tournament of Roses. The abundance of flowers, even in the midst of winter, prompted the club to add a parade before the competition, where entrants would decorate carriages with hundreds of colorful blooms.