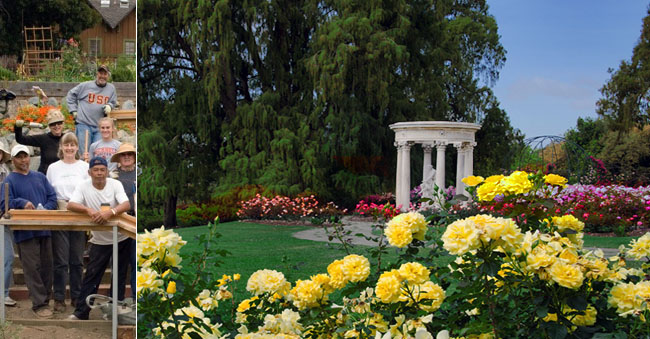 Famed Landscape Architect Ann Christoph designed the beautiful new gateway to West Central Park in a project made possible by the Huntington Beach Woman's Club, the City of Huntington Beach and the HB Tree Society.

Christoph, who won an award from the American Society of Landscape Architects (Southern California Chapter) for her design of the Shakespeare Garden at the Huntington Library and Botanic Gardens in San Marino, is also known for her uplifting streetscapes, one of which is in the City of Laguna Beach on Coast Highway.

"I'm delighted to be involved in this effort," said the former Laguna Beach Mayor, who also is an instructor at the University of California Irvine. "The median project (located off Edwards Street on Central Park Drive), is exciting because it further helps to beautify the fantastic park and utilizes drought-resistant trees and vegetation."

One section will have a red flowering eucalyptus, with drought-tolerant plants underneath. Large rocks from Riverside County help add a slope to the grade so the top plants need less water and the ones below need more water. The water is captured rather than run-off. There will be more than 30 drought-resistant plants.

"It was so wonderful working with the Tree Society, the Woman's Club and the City," said architect whose work has been featured in Sunset Magazine. "They really care and make such a positive difference in their community."

"Juana Mueller also did so much to help make this happen," said Jean Nagy, President of the HB Tree Society. "She and others helped make the dream a reality, turning an ugly street into something so beautiful."

"The Woman's Club and the Tree Society really made a huge contribution to the city and its residents," he said. "The money they raised helped pay the landscape architect and contractors." "It was a complete partnership," said Juana Mueller of the HB Tree Society.

Tom Ross, a resident who backs to Central Park Drive, said the new median "is wonderful because it not only beautifies the park entrance but helps stop racing and people making dangerous ‘donuts' on the once wide street. It should make the street quieter and safer."

The Huntington Beach Woman's Club made their donation for the new park entrance median in honor of their 100th Anniversary. They lobbied for the first street light and used the first one-room schoolhouse in the city as their meeting place. The club was formed in 1908 but formally incorporated in 1915 and has been helping the community by establishing the first library, promoting the suffragette movement, providing educational scholarships and beautifying the city.

Their building at 420 10th Street burned to the ground in 2011. But the property was sold for $1.2 million and the money has been divided up and donated to 25 worthwhile projects, including the median, Project Self Sufficiency, the HB Library, Boys and Girls Club and the Nurses Program at Golden West College. The club now meets in local restaurants.

In front of over 50 people, Diane Amendola, President of the Woman's Club, recently cut a ribbon around the median in front of a plaque honoring the 100th Anniversary of the incorporation of the club and 100 years of philanthropy and service to the citizens of Huntington Beach. The U.S. Flag that flew over their building and got singed in the fire was officially retired. Their old club sign, also survived the fire and was on display. The entire median project is scheduled to be completed by the end of November.