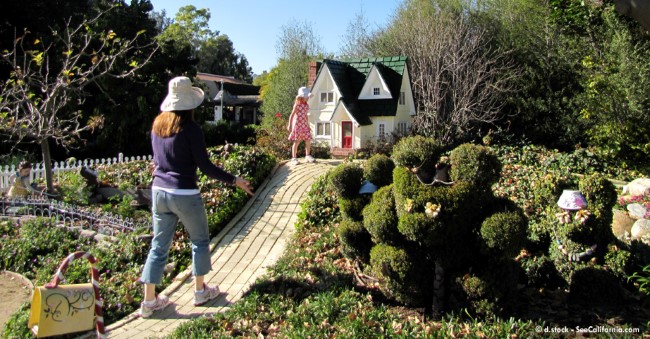 PALOS VERDES PENINSULA-Wonder never ceases at the amazing South Coast Botanic Garden, a unique locale where many Hollywood movies and TV shows are shot on the beautiful Palos Verdes Peninsula.

Conveniently located at 26300 Crenshaw Blvd. , the former rancho and sanitary landfill, turned tropical paradise, celebrated its 50th Year as a garden in 2010.

You can see a Monkey Puzzle Tree, used in the Rex Harrison hit movie, "The Ghost and Mrs. Muir;" a lush landscape setting filmed for "CSI-Miami," and Banyan Trees, featured in the famous Tarzan movies. Animal Planet, the History Channel, The Amazing Race and other shows sometimes film here.

Kids of all ages from 2-100 are awed by the Sausage Tree, which has hanging sausage-like fruits that are eaten by elephants and giraffes in the wilds of several countries. The King Palm, self-cleans itself by dropping off the branches, said Ann Richardson, a long-time docent and one of over 400 dedicated volunteers, who have their hearts in the gardens.

There's a Chilean Palm, a tree people in Chile tap to produce wine; a Garden for the Senses, highlighted by different fragrances, feels and sound-producing plants. You can have a self-guided cell phone audio tour as you stroll through the park, home to Red Foxes, Raccoons, Possum, Skunks and other wildlife.

On Saturdays, for a minimal fee, you can ride a tram and hear a colorful, narrated tour about the vegetation and movies filmed there. It's a smooth trip around a portion of the 87-acre home to 140 plant families and more than 2,500 diverse species of plants from around the world, according to Adrienne M. Lao, CEO of the South Coast Botanic Garden Foundation. "About 100 trees, shrubs and plants are rare specimens seldom seen elsewhere."

In 1784, the site was part of Juan Dominguez' Rancho San Pedro. In 1944, it became an open pit mining area. From 1957-1965, it operated as a landfill by the Los Angeles County Sanitary District. Over 3.5 tons of refuse is buried under the landscape. In 1960, it was dedicated as the South Coast Botanic Garden . It houses numerous exhibits from flower societies; there are Music in the Garden events; Art Displays; a wonderful Gift Store, Lecture Series and even a Children's Garden and Workshop.

It's one of the most popular places to hold Weddings, said Graham Armstrong, Special Events coordinator. If you want to get married, hold an event, workshop or film a movie, you can contact Graham at garmstrong@parks.lacounty.gov.

To find out more about the unbelievable place, admission fees, events and much more, please look at www.southcoastbotanicgarden.org or call 310-544-6815 or 310-544-1948. Make a trip to the gardens soon. You'll be very glad you did!