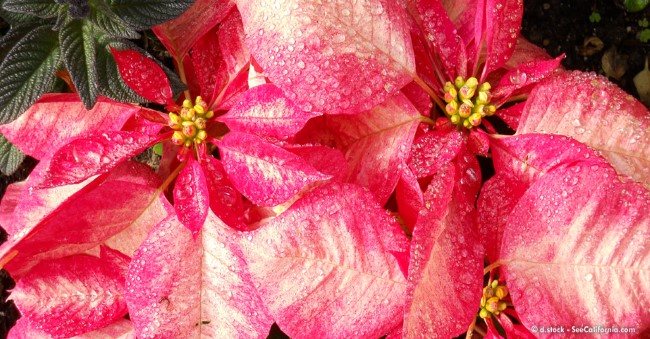 Selecting and Caring for Poinsettias in California

Joel Poinsett, the first U.S. ambassador to Mexico, is credited with introducing the plant to this country in 1828. He raised the plants in his South Carolina greenhouse and gave them to friends. National Poinsettia Day is celebrated Dec. 12, the anniversary of Poinsett's death.

• The red or otherwise colored bracts frame the plant's actual flowers, which appear as yellow clusters at the center of the bracts. The plant drops its bracts and leaves soon after those flowers shed their pollen. For the longest-lasting poinsettias, choose plants with little or no yellow pollen showing.

• Contrary to popular belief, poinsettias are not poisonous to humans or pets.

• Poinsettias are not frost- tolerant. They will grow outdoors in temperate coastal climates, such as Southern California beach communities. In the ground, they can reach 10 feet tall.

"We started out a little slower than last year," said Rocket Farms' Brothers. "But after Thanksgiving, everything doubled, then tripled, then boom! It was a major, major change. Now everybody is ordering like crazy. Consumers are buying poinsettias again."

"The different colors (and combinations) sell better before Thanksgiving," Brothers said. "As we get closer to Christmas, the market shifts to almost 100 percent red or red tones. People got to have that traditional red."

But even that shade of red is changing.

"Instead of the usual bright red, people are gravitating toward deeper reds," Brothers said. "It's really a maroon. Or they want a softer orange-red; a little different, but still red."

In addition, the Salinas grower supplies poinsettias to eight certified farmers markets and scores of nonprofit groups such as churches, youth football teams and school boosters that use poinsettia sales as annual fundraisers.

A major poinsettia grower for 25 years, Rocket Farms devotes about 3.5 million square feet of greenhouse space to the holiday crop.

Beginning in February, the grower starts with "mother plants" from Ecke and European hybridizers Syngenta in the Netherlands, and Selecta and Dummen in Germany. Repeated cuttings from those original plants spawn 1.35 million potted poinsettias (with three or more rooted cuttings per pot) that Rocket Farms will sell during a

Poinsettias are the top-selling potted flowering plant in the United States with sales exceeding $256 million in the U.S., according to the U.S. Department of Agriculture.

During the six-week holiday season between Thanksgiving and Christmas, more than 75 million poinsettias are sold, far outpacing chrysanthemums and orchids, its next closest competitors.

As a result, breeders and growers are under intense pressure to develop varieties that look spectacular, bloom at the right time, ship well, satisfy consumers, and survive outside nursery care.

The breeding on all plants, including poinsettias, is moving at light speed If you don't keep updating your varieties and making sure that you have the very best, you'll be left in the dust," he said.

Poinsettias belong to the euphorbia family, a group of 3,000 plants distinguished by their milky white sap. The color comes not from poinsettia's flowers but from its modified leaves, called bracts.

Premium Picasso, Monet Twilight, Shimmer and Surprise – the names hardly sound like Santa, Frosty and Rudolph. But they're as much a part of the Christmas celebration as mistletoe and the Douglas fir.

Poinsettias – a California holiday staple for generations – have come a long way in recent years as hybridizers have developed exotic variations of the familiar flower.

National Poinsettia Day honors the man who first brought this Aztec favorite to the attention of U.S. gardeners. Today, poinsettias are the No. 1 potted plant in America.

The plants in stores aren't your grandma's poinsettias. They're the result of state-of-the-art hybridizing and research, both in California and Europe.

"Where's the pop? That's what we're looking for in poinsettias," said Doug Brothers of Rocket Farms in Salinas, which will send thousands of poinsettias to Sacramento-area supermarkets. "We want the hottest and the best we can find."

About 70% of the potted poinsettias in the United States and half of them worldwide got their start at Paul Ecke Ranch in Encinitas, just north of San Diego. Starting in the 1920s with a Mexican native plant that grows wild along Southern California's coastline, the Eckes developed more than 100 new varieties.

Although it has moved much of its propagation to Guatemalan greenhouses to cut costs, the family-owned company still breeds its poinsettias in California, the No. 1 poinsettia state (Ecke Farms was sold in 2012, however.)

Poinsettias sold in Sacramento stores are all California-grown. Because flowering poinsettias can't withstand shipping for more than two or three days, most are still grown from cuttings close to their destination.