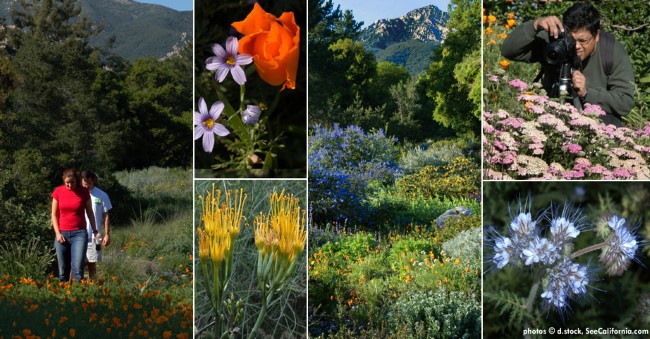 Some compare Santa Barbara to the Riviera, while others say it's like no other place on earth. That's absolutely true. Santa Barbara is a destination and region unto itself, and if Oprah and host of celebrities don't have some inside fix on this beach locale, then why have they built multi-million dollar mansions along Santa Barbara's coast and rambling ranch land?

Santa Barbara has lots going for it but here are the elements that come together to make it so desirable: Beaches, mountains,  wineries, history, a university, and an arts school.

Santa Barbara's heritage is ever present and visible in places such as the Queen of the Missions. The dual bell towers on the Santa Barbara Mission can be seen in the distance from vantage points at the top of the Santa Barbara County Courthouse. While visiting the courthouse downtown, be sure to take the history stroll along the cobbled brick walkways that weave a story of the city's Spanish past. Known for its red Spanish tile roofs, Santa Barbara looks like a picture book place. Most the history tour winds in and out of shops and buildings along State Street, the main street filled with shopping and dining stretching over a mile to the beach and Stearns Wharf.

Down at the ocean is the wharf experience, beaches lined with towering, stately palm trees, a beautiful skate park, carousel ride, volleyball courts on the beach, a public swimming facility and playground at the beach, and a harbor with tour boats for whale watching, fishing trips, visits to Channel Islands National Marine Park's islands, and other fun activities such as kayaking. When you visit Santa Barbara, each trip only scratches the surface of the countless things to see & do in Santa Barbara. Santa Barbara Botanic Gardens - California Flowers Santa Barbara Botanic Gardens

-- Santa Barbara Botanic Gardens is tucked up in the hills above the Santa Barbara Mission. Surrounded by expensive houses in an established neighborhood filled with tall trees and lots of vines and shrubs.  Neighbors that enjoy this botanic garden often walk their dogs down to the beautiful refuge.   Described in brochures as a native garden, the authentic look and feel of the tucked away treasures provides an experience that's very natural and not overwhelming. A sweeping sensation of peace, beauty and well-being comes over you as you head down the shaded paths that traverse a creek on one side of the road. On that portion of the gardens are plants that do best in the shade.

In 1925 the Carnegie Institution suggested a cooperative undertaking with the Santa Barbara Museum of Natural History to administer a botanical garden reaching from the sea to the crest of the mountains. Plant ecologist Dr. Frederic Clements came to Santa Barbara as Carnegie's representative in search of geographic sites that could be used for experimental plant research. In 1926 this plan became a reality when Anna Dorinda Blaksley Bliss, a local philanthropist, purchased 13 acres in Mission Canyon for the museum where both the mountains and the ocean are visible.

Crossing the street are more open fields with butterflies flittering around lots of bumble bees buzzing around the flowers when they are in bloom.

California is one of Earth's 25 biodiversity hotspots - areas with unusually high numbers of species.
Among the 5,800 native plant species occurring in California, 1,700 have such small populations that they face extinction in the next 50 years. Despite a long history of scientific study, we still have scant knowledge of the role most California native plants play in natural landscapes.

The Garden is committed to conserving the rarest plant species of the Central Coast Bioregion, which encompasses Monterey and San Benito counties south to Ventura County, and includes California's Channel Islands.

The Santa Barbara Botanic Garden includes Garden Shop, a retail nursery and Blaksley Library. The gift shop features books, cards and magnets commemorating your visit to this special place that many tourists never stray to. Finding it requires a bit of effort compared to the beach and State Street shopping but it is well worth the effort to explore. Garden


In 2003 the Garden and was granted County Historic Landmark status to 23 of the Garden's 78 acres, the Aqueduct, Indian Steps, Entry Steps, the Information Kiosk, the Caretaker's Cottage, the Blaksely library and  Campbell Bridge.