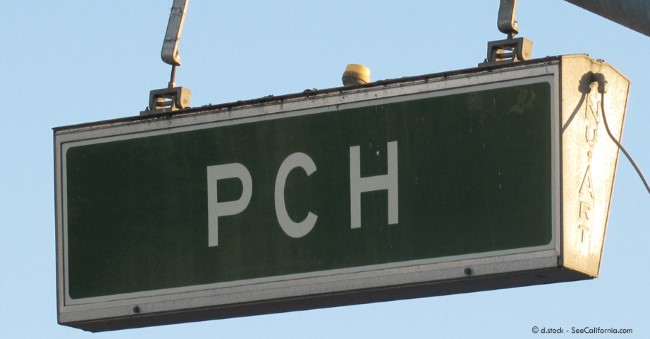 PCH begins in Southern California at Interstate 5 near Dana Point at Capistrano Beach.  As it stops-starts its way for hundreds of miles along the coast north to the Oregon border, it takes many twists and turns. Following the PCH trail is a complicated endeavor sometimes. But when you are on the road and see the signs, there's a happy feeling that this is one of California's great roads to be driven upon and enjoyed.

California Highway 1 was funded by a state bond in 1919. Intended as links in a continuous coastal road from Oregon to Mexico,  Legislative Route 56 from San Simeon to Carmel that connected with existing county highways at each end, and Legislative Route 60 from Oxnard via the coast to San Juan Capistrano, got the ball rolling in building a seamless ribbon of highway to meet the ultimate goal.  A large expansion of the state highway system in 1933 resulted in Legislative Route Number 56 connecting more of the road which was incomplete even after 10 years.  Progress and connections in the yet-to-be completed highway which went by many names, but was finally called California Highway 1 when the signs appeared along its segments in 1934 after California decided to number its highways. Some of the multitudes of highway numbers and names were slowly replaced with U.S. Route 101 Alternate as the road was built out circa 1936.

To follow the entire PCH highway today would require detailed instructions, much patience, and an eagerness to explore. One thing is for certain. When you see the sign that says "PCH" or a road sign marked with  the number 1, there's a recognition that this is a really cool name, and sights are varied, local, eclectic, and include ample stoplights, giving you plenty of time to think about and understand why super highways replaced this older highway that hugged the coast, but eventually became choked by too many people--especially at the Southern California beaches during the summer months!