Do you know the way--to San Jose? 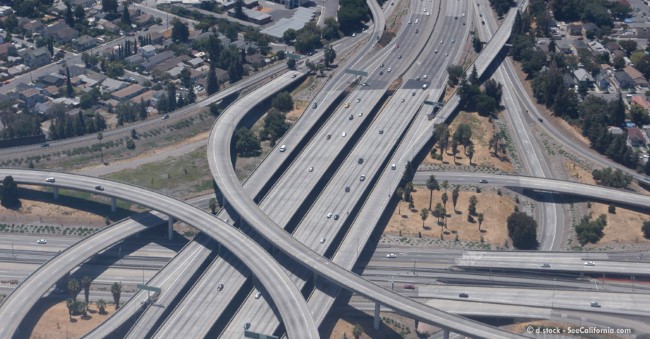 Dion Warwick asked, "Do you know the way to San Jose?" in a popular song made popular nearly half a century ago. But what she didn't know was that San Jose would become one of the biggest cities in California, outpacing its neighboring San Francisco in growth.

The photo shows a network of freeways in San Jose, which at one time enjoyed a semi-rural atmosphere, but has grown to become a busy place filled with traffic delays, rush hour and cross-town traffic trepidation.

Some of the freeways in and around San Jose are called expressways.

Not to be confused with Capitol Avenue, beginning at an intersection with Capitol Expressway, ending in Milpitas.

Lawrence Expressway (G2) A north-south route from Sunnyvale, through Santa Clara, Cupertino, and San Jose to Saratoga. Intersects SR 237, US 101, Central Expressway, SR 82, and I-280.

Montague Expressway (G4) An east-west route from Milpitas through San Jose's North Valley neighborhood, to Santa Clara. Intersects with I-680, I-880 and US 101. Continues from the western terminus as San Tomas Expressway.

San Tomas Expressway (G4) A north-south route from Santa Clara, through San Jose, to Campbell. Intersects with US 101, Central Expressway, SR 82, and SR 17, and continues from the northern terminus as Montague Expressway.