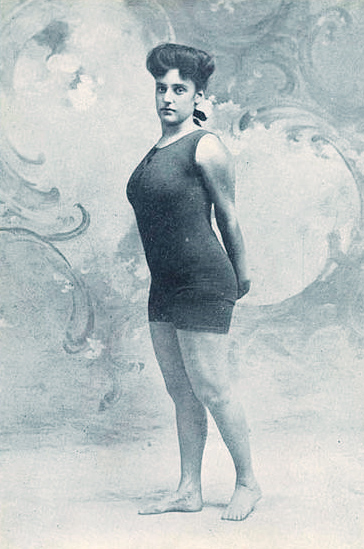 A champion for women's rights, Australian born Annette Kellerman came to the United States as a professional swimmer & performer. She wore a controversial one piece, form-fitting body suit, which resulted in her arrest on a Boston beach in 1907.

The athlete eventually made her way to California (she now has a star on the Hollywood Walk of Fame) and was the first woman to do a nude scene in a movie in 1916, unafraid of controversy.

Women have endured much suffering through history in terms of the rules and regulations that have allowed men more generous freedoms, especially when it comes to clothing.

It's a sad commentary that California's male and female population today have virtually lost the right to sunbathe and swim nude at the beach when a judge decided in 2010 that  California State Parks employees could issue tickets to beach visitors if they wore no clothes.

Victorian era ethics have prevailed for over 100 years in America--but the brave souls who fought for our human rights and won, such as Annette Kellerman, can be lauded for their efforts.  On beaches 100 years ago in California, you would usually see women wearing dresses that covered them from their necks to below their knees. Not an easy type of swimsuit to help you improve your craft, society wanted to make sure that women were covered up. It wasn't always that way, but the values of society sway back & forth, apparently. Historical depictions over 2,000 years ago show that during ancient Rome clothing looked like the mid-60's bikini.

What in the heck happened to set women back into a prohibition that their mail counterparts didn't have to suffer?

California beach photos from the late 1800's to early 1900's show that swimsuit fashion was amazingly cumbersome for women. Clothes were long, covered most body parts, were made so that you couldn't see through them, and even contained weights on the skirts so that they would not float up in the water.

Kellerman wore her bodysuit that causes arrest at a Boston beach, so she added arm coverage and longer leg coverage to the one piece outfit, and seemed to "skirt" the laws and avoid being arrested again.  As an athlete and swimmer, the fashionable and acceptable swimwear of the day was not practical for this performer who appeared in tanks for the public to watch. She even created a synchronized swim show portrayed in the 1952 movie with Ester Williams, Million Dollar Mermaid.

Kellerman  helped pave the way for women to wear bikinis today, though nudity has not been re-established as a legal and acceptable practice for swimming in the U.S.

Of interest and as a side note: Kellerman in her later years owned a health food store in Long Beach.