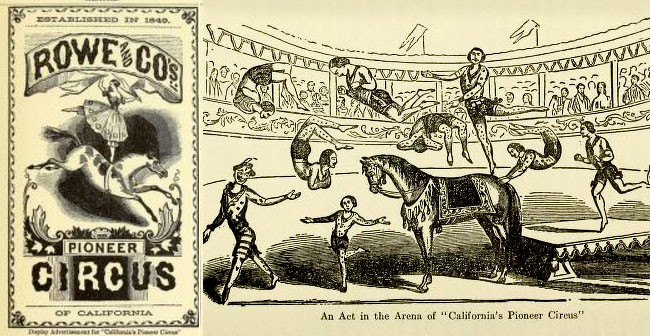 The sun was setting behind the pine-studded hills that gave the mountain diggings its name (Forest City) but its rays still lit a spot where men struggled to erect a huge tent, creating a buzz of excitement throughout the camp. California's Pioneer Circus had come to town.

The streets were crowded as people of all ages hustled and bustled their way toward a long line near the tent, to purchase tickets for $1 and $2.

Rowe & Co.'s Pioneer Circus was certainly a welcome break from the arduous rigors of Mother Lode Mining in 1856-57.

The chance to see tumblers, acrobats, flying equestrians, clowns, cannon ball catchers and even a festive band was really something to behold.

Soon the tent flaps were opened and anxious people streamed inside where they were greeted by the sight of four horses in silver harnesses and the blaring sound of "Battle Hymn of the Republic."

The show was about to begin. Dramatically, in thunders the beautiful Mary Ann Whittaker, waving an American flag, poised on the back of a huge black stallion.

Cheers, whistles and shouts from the boisterous crowd echoed through the tent.

In comes H.W. Franklin, who hung by his hands, then his feet and finally by his neck from a galloping horse. The crowd went wild—showering their appreciation with a deafening response.

Franklin's next unbelievable heroics prompted one reporter to write: "Safe on his steeds as side by side they run, He shifts his reins and vaults from one to one. And now on this and now on that he flies. Admiring hundreds follow with their eyes."

The same scribe was awestruck by the following act, which featured a strongman catching 32 and 48-pound balls fired from a cannon "as a boy would catch peanuts."

There was something for everyone as contortionists, Shakespearean jesters and tumblers competed for the audiences' wide-eyed delight.

Even circus namesake, James Rowe, took the spectators' breath away with his incredible leaping horse, Virginia, who was described as "faster than lightning."

Critics raved: "The audience frequently made boisterous expressions of delight...", "Truly astonishing!" and "Everything was in First Class order from the artists to the glitter in the lively show."

People came from far and wide to see the circus. Twenty folks in Rabbit Creek even left at 4am for a 16-mile hike—much of it through timber and brush—to reach Downieville in time for the performances. They said the walk was well worth it.

Rowe and his troupe left a lasting impression on the Sierra. California's Pioneer Circus would be remembered.