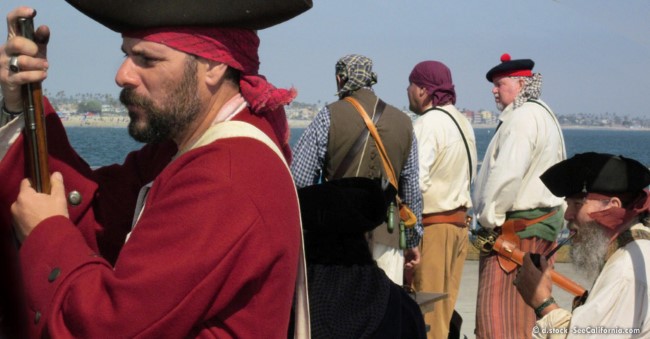 The history of pirates in California does exist, though pirate acts on the West Coast have not been as abundant as the southeast U.S. in Louisiana, Florida and Mississippi.

Today in California you'll see the word "pirate" in all sorts of places. Pirates Cove in Point Arena, Pirates Cove in Avila Beach, California Pirates Baseball Club, Disney's Pirates of the Caribbean, Pirates Dinner Adventure in Buena Park, Pirates Grub & Grog in Oxnard and pirate events throughout the state are celebrated mostly as reminders or names to market something as being fun and adventurous.

The world "pirate" also has been adopted by the high tech industries, musicians and attorneys in their efforts to protect and defend trademark materials. Microsoft has been among the companies suing other firms and individuals with claims of piracy, meaning that these other entities have stolen their goods, they allege.

The most famous known attacks by pirates in California occurred around Monterey.  Frenchman Hippolyte de Bouchard raided the Presidio of Monterey in 1818 (November 20.) The revolutionary  has been called California's only pirate.

Bouchard went to Hawaii (named Sandwich Islands during his time) to find a new crew after he lost most of his men to diseases such as scurvy,  and then sailed to the coast near Mission Santa Barbara, threatening the nearby town. Soldiers from El Presidio de Santa Barbara averted an attack by arranging a prison exchange and Bouchard and his crew left. But they didn't give up on the coast of California as a source offering items they sought.

Justice was meted out to pirates in a manner that brought attention even after death. During the 17th and 18th centuries,  "dancing the hempen jig", or hanging at the end of a rope provided entertainment for townspeople who came out to watch public executions advertised and written about in newspapers, where every detail was reported. The condemned pirate's last words, the prayers said by the priests, and their final agonizing moments on the gallows were relished by many who hated pirates and what they represented.

Famous pirates received special attention. Their bodies were placed in iron cages  measured to fit the man before his execution, and the body was left to swing in the air inside the cage until the flesh rotted off, taking sometimes several years.  Jack Rackham, William Kidd, Charles Vane and William Fly were all caged.

Blackbeard (Edward Teach) had a thick, black beard which was braided and tied with ribbons. He and  Jean Lafitte were to well known pirates along the East Coast and Caribbean. Blackbeard was known to enter battle equipped with three pairs of pistols strapped across his chest, daggers and pistols in his belt, a cutlass, and a slow-burning thick hemp cord tucked under his hat which produced lots of smoke.

He was captured in 1718 in North Carolina and died in a bloody battle after a bounty had been placed on his head.  Blackbeard's head was cut off, and returned for his reward with it hanging from the bowsprit of his ship. Blackbeard's crew were tried in Virginia and all but one was found guilty and hanged.

Unlike Blackbeard, Laffite respected a country he lived in and did not allow his pirates to attack American vessels when he lived there. Laffite, like most pirates, was known to cross the bounds, and was involved in illegal slave trade to the U.S.  Mostly he and his crew plundered Spanish and English ships and were protected by a letter of marque.

A privateer or corsair in possession of a commission or letter of marque from a government could capture   merchant ships belonging to an enemy nation.  The U.S. Constitution authorized Congress to issue letters of marque and reprisal. The letter of marque was recognized by international convention and meant that a privateer could not technically be charged with piracy while attacking the targets named in his commission.

While pirates didn't have much of a presence in the Old West, pirates  recently held an Orange County, California couple, Jean and Scott Adam, for ransom and the couple was murdered on the high seas. They were part of a mission to distribute Bibles around the globe, and traveled on their personal craft for over six years before the attack. Carried out by 13 men from Somalia and one from Yemen, the pirates were captured. Unlike the past, pirates today often receive a life sentence spent in a prison when found guilty of murder.