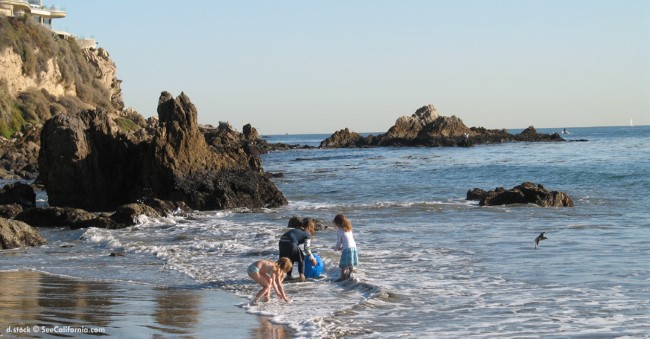 Corona del Mar was planned as a at turn of the 20th century vacation resort. On June 29, 1904 George Hart signed an agreement with the Irvine Ranch for the purchase of a 706.08-acre corner of land on the Irvine Ranch for summer cottages. Visitors came to play and wouldn't leave, however.

Until the late 1920's, Corona del Mar was a tiny village reached from the peninsula by small boat at high tide, or by a muddy dirt road that crossed the Irvine Ranch and continued along the bluffs around Newport Upper Bay. With the opening of Pacific Coast Highway in 1926 (Mary Pickford & Douglas Fairbanks were there for the ribbon cutting),  slow growth began, not accelerating until after World War II.

In 1928, the Corona del Mar Surfboard Club hosted the Pacific Coast Surfboard Championship. The club was the largest of its kind in the United States with members such as surfing greats Duke Kahanamoku, Tom Blade of Redondo, Gerrard and Art Vultee of the Los Angeles Athletic Club, and other world class surfers who brought international attention to Southern California beaches.

An extension of the jetties in the late 1930's ended the "Killer Break" on the east side Corona del Mar and led to the emergence of the popular but dangerous break known as the "Wedge" to the west on the Newport Peninsula. It also led to the demise of surfing popularity in Corona del Mar.

Five Crowns Restaurant was built in 1935 as a copy of Ye Olde Bell, an Inn at Hurley-on-the-Thames, England. It has been a residence and an inn, it has been forsaken and neglected, and now operates as a popular, fine restaurant where prime rib is absolutely out of this world delicious. It is probably the best in the Southern California.