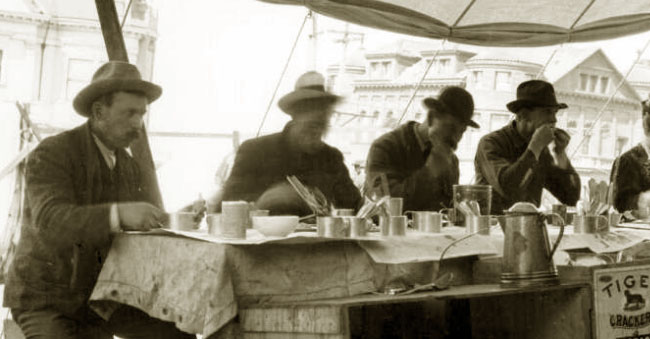 A Buck To Be Had—Feeding The 49ers

"The beefsteak is of leather
And the pies are made of tin
The bread couldn't be cut with a sword
The butter wears sidewhiskers
And the coffee's pretty thin."
—A 49ers Lament

Although there were a lot of complaints made by 49ers about their food, many were lucky to have it. Food became scarce as thousands descended upon the Sierra during the Gold Rush.

Between April and December of 1849, over 700 ships reportedly arrived in San Francisco to unload thousands of people eager to "get at" the Sierra and strike it rich. For many, food became worth more than gold.

A lot of miners suffered the fate of Major William Downey and his men who struck it rich and had bags of gold yet nearly starved to death in the Northern Mines.

Ironically, this type of desperate predicament created fantastic opportunities. Some miners who had been farmers enthusiastically returned to their former occupation to strike gold in the Sierra.

—Potatoes turned into nuggets. One Weaverville farmer earned $18,000 from a potato crop he sold to Sierra miners. Potatoes were especially in demand because they helped prevent scurvy, as did pears.
—One Coloma farmer sold unripened pears still hanging on the trees. Miners paid a dollar or more, taping their names to unripened pears, returning to claim them later.
—A crop of melons sold for $30,000.
—One chap sold an acre of onions for $2,100.
—Apples became a real luxury. A Downieville widow reportedly earned $18,000 from baking apple pies for the homesick and hungry miners.

Farmer turned freighter George Briggs planted fruit trees along the Sacramento, Yuba, Feather and other Mother Lode rivers. He then put together a fleet of mule-driven wagons that distributed peaches, apricots, cherries and plums to a bunch of Sierra camps, including Nevada City and Downieville.

There was definitely a buck to be made by entrepreneurs who knew how to use the Sierra's wildlife to supply the increasing demand for food.

Hunters supplied miners with elk, deer and bear meat. Fishermen caught salmon and sold them for $2.50 a pound. Ranchers sold cattle for $50 a head. From 1850-56, over 30,000 cattle raised in California fed miners and others in the Sierra. Many more cattle were driven from the Midwest for the same reason.

Meanwhile, shippers and importers knew a good thing when they saw it. Ships started bringing flour from Chile, sugar from Hawaii, oranges from Tahiti and rice from China.

Completing the foodchain were packtrains—especially welcome sights to remote mining camps—that brought the likes of canned oysters, cheese, sardines, ham and pork and other staples to the Sierra.

Ironically, some food was overproduced and flooded the market. But this too created additional opportunities for the creative speculators. There was so much wheat produced that farmers began selling it to Great Britain and Hong Kong.

In the mining camp of Rabbit Creek, entrepreneurs brought in so many apples that prices collapsed. But that gave Levi Westonhaver an idea and an opportunity.

He went around purchasing all the apples for next to nothing and earned a fortune from the cider and jack he made from them.

Creative thinkers from around the world brought their culinary talents and tastes to feed the miners with a wide variety of ethnic foods.

From an eating standpoint, one of the best places to be a seller and a buyer was in Sonora. There was such a dazzling diversity of food available there in the 1850s. Carts sold tortillas filled with meat and chili.

And, thanks to the agricultural explosion in the Gold Rush, the California State Fair got its start bringing joy to thousands.

In 1852, the "Alta California" newspaper urged the formation of an Agricultural Society to show off the quality and variety of the state's farm products. A couple years later, the Legislature created the State Agricultural Society to plan expositions. The first State Fairs moved around to different cities, like Marysville, until finally settling down in Sacramento (1859).

Descendants of many of the state's Gold Rush crops are still judged there and at county fairs throughout California. And those who exhibit their produce have the same hopes of the original 49ers—to bring home the gold.