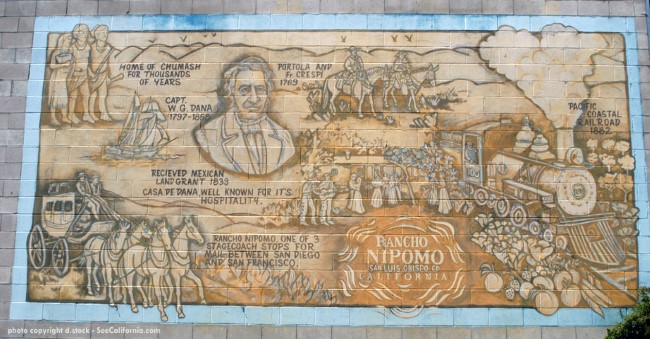 Nipomo is located north of Santa Maria and south of Arroyo Grande near Interstate 101 in San Luis Obispo County, Calif.

Dana Adobe in Nipomo is run operated as a museum and includes a collection of artifacts and items surrounding the local history on lands once known as Rancho Nipomo.

On a wall mural as you enter town, the history begins with Chumash Indians. Living in the area for thousands of years, the Chumash today own and operate the four diamond Chumash Casino near Buellton & Solvang.

In 1769 Portala & Fr. Crespi, the Spaniards assign to establish missions and strongholds in California, traveled north and began creating settlements in what is now the Central Coast. Missions were created to the south of Nipomo in Solvang and Lompoc, and to the north in San Luis Obispo.

Captain W.G. Dana (who lived from 1797-1858) received a Mexican land grant in 1839. He and his family lived in the Dana Adobe, which is now a museum. The adobe on the Rancho Nipomo lands was considered a place of hospitality. Rancho Nipomo was one of three stops for mail between San Diego and San Francisco.