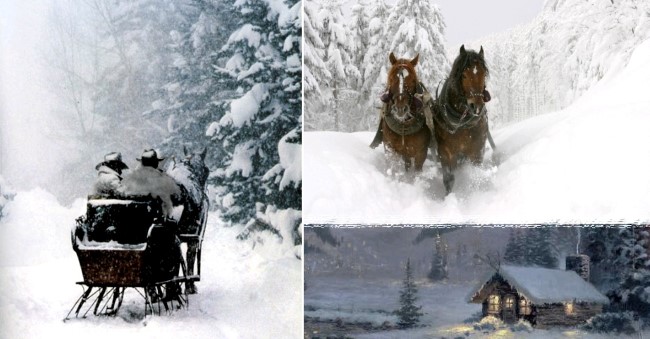 (A Christmas Story, from the acclaimed book, "Old West Christmas-Tales with a Twist" by Pulitzer Prize nominee Craig MacDonald; goldrushglimpses.com)

On Christmas Eve, 1880, a sleigh carrying G.W. Green and Dan Callarner was caught in a major snowstorm on the eastern slope of the Sierra. In spite of the incredibly heavy snowfall and high winds, both men were about to witness a Christmas miracle. They were desperately trying to get from the gold camp of Bodie (northeast of Yosemite) to the Homer Mining Company, 28 miles away.

"We started early, going through a blinding snowstorm, hoping to get there before nightfall," Green recalled. However, something unusual happened 10 miles outside of town that would change several lives forever.

"We were nearly thrown out of the sleigh, when our horses suddenly jumped to one side," Green told the San Francisco Call. What caused the horses to rear was an apparent body on the snow-covered road. But much to their astonishment, the person was not dead.

They were able to resuscitate him and discovered the poorly-clad and dejected fellow was trying to reach the mining camp of Lundy. Good Samaritans that they were, Green and Callarner carefully lifted the stranger into the sleigh, covered him with a blanket and offered to give him a ride to Lundy.

The next morning, the three strangers were invited to breakfast. "The child took a fancy to the elderly man and he noticed her name (Jessie Barnes) on the girl's book," Green reminisced. "The old man eagerly asked about her father's name, just as George Barnes walked in."

The feeble guest rose, held out his hand, and said to George, "Don't you know me? If you're the son of Jessie and Richard Barnes, you ought not to have quite forgotten my face."

George looked at the man with disbelief. It had been 20 years since he'd seen that face. 'Father!' he said, putting his strong arms around the old guy's neck. Richard had come to California to find his fortune, leaving his family back East. Things did not pan out and he lost track of them. Later, George came West and became successful in mining.

Thanks to the Good Samaritans, who picked up Richard, and Mrs. Barnes, who let strangers in a snowstorm spend the night, everyone witnessed a Christmas miracle, Sierra Style. And the four Barnes lived happily ever after.

(This is just one of the amazing true stories, illustrated in watercolor by legendary artist Bill Anderson, that you'll find in "Old West Christmas-Tales with a Twist." To purchase an autographed copy of this rare collection of true stories on how miners and settlers got a real boost of holiday spirit when they needed it most, visit goldrushglimpses.com)