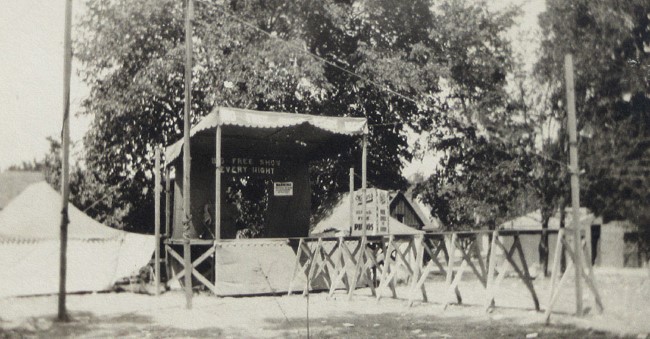 Before TV, thousands of Americans eagerly awaited the legendary Stock's Big Fun Show that arrived by truck and played in their towns for 5 days to 12 weeks between 1926-1942.

The exciting 15-person Minstrel and Vaudeville Show, complete with band, played outdoors to standing room only crowds. Comedians, gymnasts, magicians, ventriloquists, stilt walkers, singers and dancers made for quite a spectacle at the FREE nightly productions, which lasted anywhere from 90 to 120 minutes.

Show Creators/Producers Freddie and Etchie Stock of Quincy, Ill. used the Big Fun Show to sell their amazing health products at the events. Freddie worked with an Ohio laboratory to create what became one of America's greatest selling tonics, "Stock's Nu-Tone."

Patented in 1926, it's catchy slogan was "Tones Up Any Body," and it sold for $1 to $2.50 in drug stores and other businesses in 26 states. Stock's wide variety of products ranged from Nutrition Tonics, Cold & Croup Rubs, Muscle Liniment, Nerve Calmer and Nasal Oil to Dandruff Remover, "Tobacco Quit," "The Women's Friend" and more.

During the Show, Stock's Nu-Tone sold feverishly. "The crowds were in a frenzy to get it and they became part of the act," recalled Bob Stock, one of Freddie and Etchie's 10 kids. "After they finished an act, entertainers walked out into the crowd and would shout, 'Sold,' when they found a buyer. Freddie then walked out on the runways and exchanged a bottle of Nu-Tone for a dollar."

"It was really something to see," said the Santa Maria, CA resident. "Everyone loved the show and the Nu-Tone. Some nights, there were more than 3,500 people in attendance."

"In 1941, I helped out my parents when I could by selling popcorn for 5-cents a bag at the show. One of my favorite acts was, 'Rado and Gary' (banjo and guitar players), who sang old songs. My mom, Etchie, would 'bring the house down' when she played by ear lively songs on the piano, like Ragtime. We also had amateur singing, dancing and beauty contests that were very popular in each city. Winners might get a $10 bill, pearl necklace or gold-plated ring."

Before coming into a town, Freddie lined up drug store partners by sending them cleverly-worded letters. He wrote a Memphis man, who owned several stores: "I have a red hot minstrel show and band as well as interesting circus and vaudeville acts that will do more to advertise your stores than any conventional method of publicity. I recently created phenomenal sales for stores throughout the Mid-West."

When the show left a town, Freddie did newspaper advertising in local papers to keep up the demand for his products. Stock's Nu-Tone even had a Guarantee: "If you're not satisfied with the results, your purchase will be refunded by the drug store."

Freddie received numerous testimonials from happy customers, including one Indiana man, who used Nu-Tone Tablets to get over stomach problems. "Seeing is believing. Trying is convincing," he wrote in his letter.

The Big Fun Show came to a halt in 1942 because some of its stars were drafted; gasoline and food rationing, and the laboratory that produced it in Columbus, Ohio, used its resources for the War effort. Freddie continued to send his storage supply of Stock's Nu-Tone to drug stores for a couple more years until it ran out. But his fantastic show and products will never be forgotten.