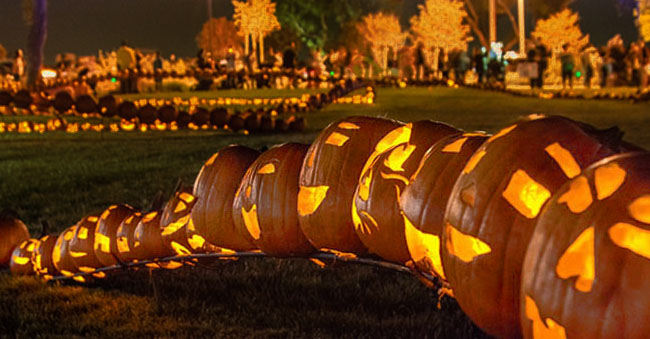 For many years the public was warned about keeping black cats indoors during Halloween. Why? Because of a superstition that if a black cat crosses your path you are in for a rough time filled with misery and bad luck.

Halloween is nothing without superstitions that range from the use of carved & lit pumpkins to witch and ghost costumes.

Jack-o'-lanterns: The story of the jack-o-lantern is based on Irish folklore about a guy named Jack. The drunken sop of a farmer, Stingy Jack, tricked the Devil. Jack died but rejected from entering either Heaven or Hell. The Devil, however, tossed him an ember from hell, which Jack used to create his own turnip-lantern to find his way through darkness.  Jack's spirit wanders to this day, and  jack-o-lanterns are lit to guide him and other lost spirits.

Trick or Treaters:  Celtic roots run strong in American celebrations where children in costumes travel from door to door asking for treats. This tradition came from a belief that  ghosts of the deceased can re-visit earth,  disguised  in human forms such as beggars. Mixing & mingling, they can knock on your door asking for money or food. A person turning them away risks the wrath of the spirit.

Halloween Birthday: One superstition says that if you are born on Halloween you possess the gift of second sight and you will enjoy lifelong immunity against evil spirits.

Superstition: cat has nine lives, four leaf clover, cross your fingers, lucky #8, Friday the 13th, break a mirror, knock on wood, lucky rabbits foot, step on a crack, pick up a penny, horseshoes for good luck, opals bad luck, salt to cleanse a room, lock of hair for love, walking under a ladder, beginner's luck, death comes in 3s, three 6's, make a wish with a wishbone, open umbrella indoors, wash your car so it will rain, cricket in the house is good luck, kiss the Blarney Stone, pot of gold at end of the rainbow, blow out the candles on cake for birthday wish, cross my heart and hope to die, may God strike me dead, put a penny on a knife so recipient doesn't get cut, Jack-o'-lanterns guide lost spirits home, bats, spiders, witches, broomsticks, witch's cauldron, hold your breath on bridge or by cemetery, wear black to funeral, bride wears white, bad luck to step over a grave