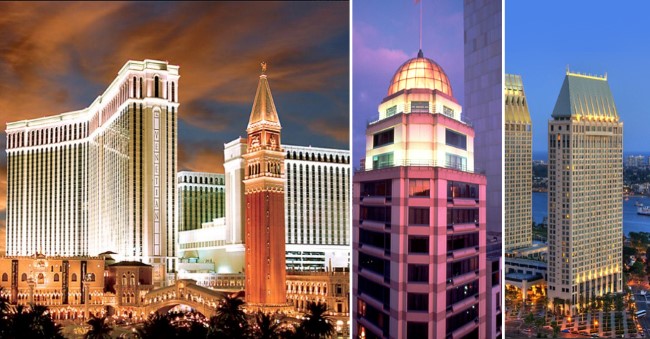 What's New, What's Hot, What's UP? Where is the biggest hotel in the world?

Biggest Hotels in the World:

Look at the pictures and maybe you can guess. If you guessed Las Vegas, you'd be correct. With 8,108 guest rooms, The Venetian Resort Hotel (left photo) is the world's biggest hotel. Also pictured are San Francisco's Hilton Union Square (#64), and San Diego's Manchester Grand Hyatt (#80).

How does California rank among the world's biggest hotels? We aren't in the Top 10, Top 25, or even Top 50. Our biggest hotel which ranks #64 in the world is 1,908 room Hilton San Francisco Union Square. In the Top 100, California has only three hotels, but guess how many Las Vegas has? Nearly 50 of the Top 100 biggest hotels are in Las Vegas, and most are in the Top 50! Now you can understand why that city has taken a beating during the recent economic downturn. Its economy is tied hand-in-hand with it's largest tourism audience, California!

California has many, many more visitors, we have the fantastic weather, we have the popular beaches & mountains, but we don't have the spectacular hotels the size of mini-cities. If you've stayed in a large Las Vegas hotel (most of you have,) you know that seeing the entire property can be a feat. Pools here, pools there, buffets and restaurants all around, concerts halls, fountains, shopping centers, casinos, and convention halls are just a part of the attractions at the Venetian, where you can even ride a gondola for entertainment!