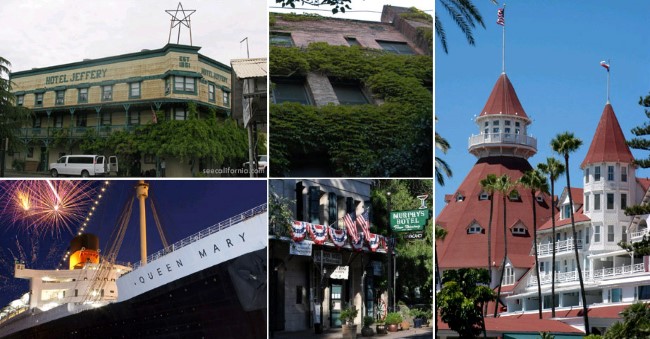 If you believe that ghost hauntings are real, measurable phenomena and not just something concocted out of one's imagination, then you shouldn't be surprised to know that California is filled with ghosts. They don't just come out on Halloween, though it is one of the spookier times to experience them.

According to a man who has studied California ghosts, Richard Senate says every mission in California has ghosts, and usually more than one. Though his focus is primarily the Central Coast and Hollywood, Senate has spent 30 years investigation the paranormal and gives excellent tours that allow members of audiences to draw their own conclusions. San Fernando Mission, the Queen Mary in Long Beach and the William Hart Museum in Newhall offer aspiring ghost hunters great opportunities for paranormal experience according to Senate, though he believes that all the missions in California and most film studios are haunted.

Some haunted California hotels (just a few of too many to mention):

Hotel Jeffery in Coulterville established in a Gold Rush town is so filled with energy that vacuums burn out constantly and a variety of ghosts play tricks on hotel staff and guests.

Queen Mary is the indisputable haunted ship. There are quite a few locations with cool spots, pitter patter sounds of a child who isn't there, and adult ghosts on board you may experience when you spend the night.

Cary House in Placerville has several ghosts who mostly do odd things such as jiggle the handles on doors and are involved in maintenance.

Hotel del Coronado was one of the first hotels to have electricity. It's a beautiful hotel that has hosted celebrities, kings, queens, and yes, ghosts. We have personal stories from relatives who worked there and experienced them.

Monterey Hotel in downtown Monterey has Fred, who likes to tinker with mechanical things and door knobs. He worked in the hotel as a maintenance guy. He just never left after he died.

1859 Historic National Hotel in Jamestown where the ghost, Flo, died of a broken heart at the hotel.

Groveland HotelBook near Yosemite  has resident ghost guest Lyle, who  is finicky about his room, Room 15.

Queen Anne Hotel in San Francisco built in 1890 for Miss Mary Lake as a finishing school for girls is said to have Miss Mary's apparition there.

Albert Shafsky House Bed & Breakfast in Placerville was built in 1902, and it appears the original owner's ghost has never left.

MacCallum House Inn, Room 4 in Mendocino is home to the ghost of  Donald MacCallum who was born in 1880. You'll find him on second floor.

Goodman House in Chico wasn't always a B&B but it has had ghosts for a very long time. They pull pranks such as throwing your objects to the ground senselessly.