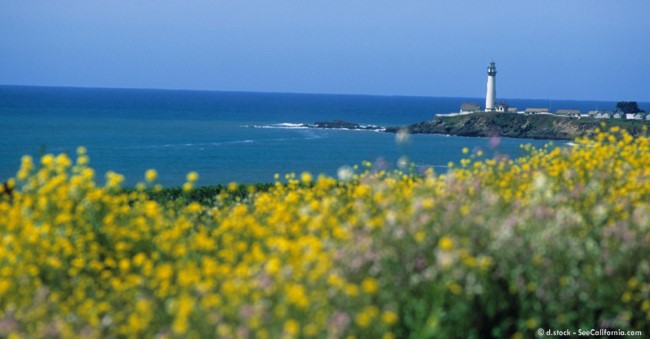 Pigeon Point Lighthouse is approx. 50 miles south of San Francisco on Highway 1, near the town of Pescadero. Guided tours are offered on Friday - Sunday beginning around 10 a.m. Rain cancels.

Open to the Public? YES (Go to Lighthouses to Visit for access information)

Miscellaneous:
TOWER UNDER RESTORATION 1992-1993; ORIGINAL FIRST ORDER LENS IS LIT EACH YEAR ON NOVEMBER 15; TRANSFERRED TO THE CALIFORNIA DEPT. OF PARKS AND RECREATION IN 2005 UNDER THE AUSPICES OF THE NATIONAL HISTORIC LIGHTHOUSE PRESERVATION ACT.

Also located approximately 25 Miles north of Santa Cruz and 22 miles south of Half Moon Bay, there's a pullout area with a beach and lighthouse view at Ano Nuevos State Reserve. The 115 foot tall Pigeon Point Lighthouse stood as an active aid to navigation for over 127 years till GPS satellites replaced lightstations and lighthouses as navigation tools. The lighthouse's five-wick lard oil lamp, and first-order Fresnel lens, comprised of 1,008 prisms, was first lit at sunset, November 15, 1872.

First-Order Fresnel lens and 115 foot Tower The Fresnel lens, manufactured by the French firm, Henry-Lepaute, had been in service at the second Cape Hatteras Light Station, North Carolina in 1863. Sometime after this date, the lens was shipped to California for use at Pigeon Point. The lens stands 16 feet tall, 6 feet in diameter, and weighs 8,000 pounds. It sits in a lantern room that had been constructed at the Lighthouse Service's general depot in New York before being shipped around the Horn. The 115 foot, unreinforced tower was built from approximately 500,000 locally produced bricks. Access to the lens is gained by climbing the 136-step, iron spiral stairway and platforms fabricated by Nuttings & Son, San Francisco. Although the original Fresnel lens is no longer in use, the lighthouse is still an active U.S. Coast Guard aid to navigation using a 24 inch Aero Beacon.

The Pigeon Point Light Station was owned by the U.S. Coast Guard and leased to the California Department of Parks and Recreation, which administered interpretive activities. In 2005, the Pigeon Point Light Station was transferred from the U.S. Coast Guard to California State Parks. Established over 135 years ago, the historic light station is 115 feet tall, one of the tallest on the Pacific Coast. California State Parks, in partnership with the Peninsula Open Space Trust (POST), a leading private, public benefit land trust, made an application to acquire the lighthouse in 2002. In March 2004, the National Park Service selected California State Parks to own and manage the lighthouse and supervise its restoration efforts.

For more than 100 years, this light station and others kept the rocky shores of California safe for mariners. The State of California preserved the legacy of this historic and picturesque landmark under the National Lighthouse Preservation Act of 2000. This Act recommended the transfer of historic lighthouses (at no cost) to federal, state or local government agencies, or nonprofit organizations. The law directs the Secretary of the Interior to work with the U.S. Coast Guard, the General Services Administration and the National Park Service to choose the best stewards for long-term preservation.

With 47 State Historic Parks, California State Parks System viewed Pigeon Point Lighthouse as the focal point of a vast network of protected lands. After raising the funds to purchase the land surrounding the lighthouse, deconstructing a motel planned for the property, and transferring it to the state, the lighthouse and the surrounding lands can be viewed from the sea as they were 100 years ago.

Pigeon Point Light Station was closed to the public in December 2001 after two, large pieces of brick and metal fell from the 115-foot tower. Inspections have shown that after many years without upkeep, the structure has deteriorated and extensive repairs are needed. However, through a public/private partnership with California State Parks, the California State Parks Foundation is spearheading a $5 million fundraising campaign to return the structure to a condition that is safe for public use. State Parks has operated the Pigeon Point Light Station for the past twenty years under a lease from the U.S. Coast Guard and intends to continue that operation within existing resources. For the restoration effort, the funding will come from private donations.

What is there to see on a visit?

Over one million birds pass by Pigeon Point annually. American Black Oystercatcher, Wandering Tattlers (August-May), Surfbirds (September-April) and Black Turnstones (year-around), plus, maybe some pigeons and some Marbled Murrelets. Ancient Murrelets are spotted off shore Nov- Feb. During summer months feeding masses of Sooty Shearwaters are seen from here and may number in the tens of thousands.

The only mainland breeding colony of Northern Elephant Seals (4,000 pound marine mammals) can be seen at Ańo Nuevo State Reserve, 7 miles south of Pigeon Point on Highway One.

Redwood Forests - Hike through majestic redwoods at Butano State Park, 6 miles east, and other nearby parks. Explore tide pools and windswept beaches, watch for migrating whales (Dec.- May), or visit nearby Pescadero Marsh.