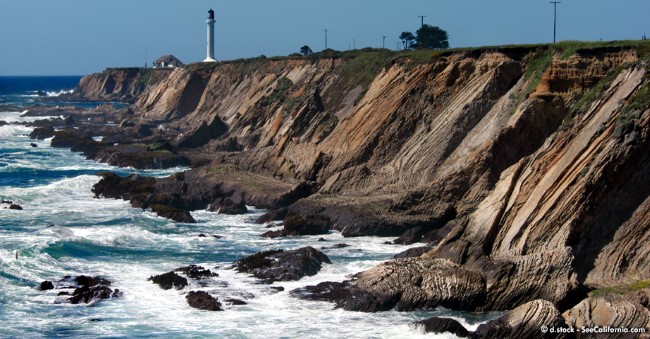 If the Point Arena Lighthouse looks oddly familiar, perhaps you've seen it in the movie, Forever Young, which was made in 1992.

Two miles north of Point Arena in Mendocino County is the Point Arena Lighthouse which was established in 1870 and first lit in 1908. Built of reinforced concrete, the white tower with a black gallery is cylindrical in shape. Standing 115 feet tall, the tower contained a First Order, rotating Fresnel lens when first launched. The height of the focal plane is 155 feet, and the current optics installed in the tower are a DCB-224. In 1977 the light tower operations were automated, thus reducing manpower and expense. Damaged in a 1906 earthquake, the tower was reinforced at that time and remains standing.

A sound signal building was constructed of wood in 1896, in the architectural style of Victorian frame. A Diaphone Fog Signal was original used but was later replaced with a bell buoy, though both are now discontinued.

There once was a Keepers Quarters which was built as a cottage constructed of wood in 1908. The 2.5 story residence was destroyed and no longer exists.

The current use of the Point Arena lighthouse and lightstation is to assist in navigation, as a museum and vacation rentals. The owner/manager is Point Arena Lighthouse Keepers, Inc., with US Coast Guard access to optics.