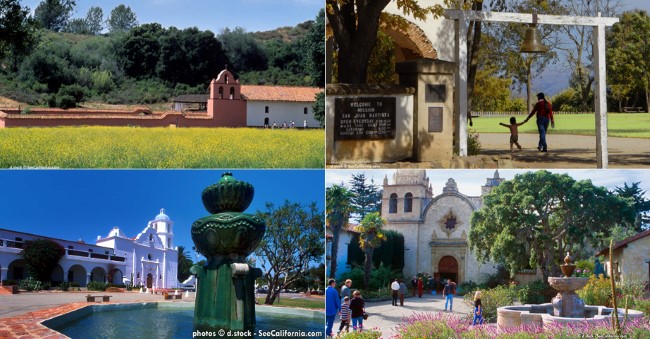 Of the 21 missions built in California as part of a chain of missions and land holdings Spaniards claimed throughout North America prior to the country's union and California's statehood, one of the favorites for the "Father of the Missions", Padre Junipero Serra, and for visitors today is the Carmel Mission.

Located in Monterey County, Calif., in lovely Carmel by the Sea, the graceful mission was built in 1771. It was the 2nd California mission constructed and was the home base or headquarters for Father Serra and his staff. References state that he sought to distance his organization from the "hired hands" or neophytes and the Carmel mission served as an administrative facility. The church today officially calls itself San Carlos Borromeo de Carmelo Mission, while other references call it a similar name, Mission San Carlos Borroméo del  Carmelo. Either way, it was named for an Italian cardinal, Saint Charles of Borremeo, but is most commonly referred to as Carmel Mission.

Serra would be proud of the mission today as it continues to serve many important functions, including the burial place of the mission era's most important figures— Father Junipero Serra, himself, Father Fermin Lasuen who carried on the work for Serra after he died, Father Juan Crespi and Jose Antonio Romeu, the Spanish governor of California. Serra died on August 28, 1784, and was interred beneath the chapel floor. The Jo Mora Chapel Gallery with a sculpted Serra Memorial Cenotaph which is not a tomb but solely a monument, was created in 1924 utilizing travertine marble and bronze. It shows life-sized figures of Serra and these three other important figures, all buried under the church sanctuary or on the church grounds.

The mission buildings have been restored and are not the very first buildings that were constructed. They were destroyed in the mid-19th century. The original bell tower dome still exists, however. There are two bell towers, one with a Moorish-designed dome. The largest tower holds nine bells, most of which are original.

The mission now serves as an active parish church of the Roman Catholic Diocese of Monterey, with regular services throughout the week and on Sundays. It is also an entertainment venue for special events and concerts performed on the Casavant organ complete with horizontal trumpets for the basilica. Then there's a museum for tourists to see and learn about its history, and there's even a private school on site for children.

The museum portion charges a fee for tours and the money is used for maintenance, as thousands pour through the museum regularly. Each California mission offers unique displays and information special to its place, and Carmel mission is no exception.

There are four museum galleries. One documents restoration efforts, another showcases the history of one of the most important area families and a third contains the Jo Mora Chapel Gallery.

The fourth gallery is the Convento Museum, which contains a bed, table and California's first library, all part of Serra's spartan living quarters during his lifetime there.

One of the most significant artifacts on display is a large wooden cross in the quadrangle. It was recreated on the site where fragments of the cross erected by Father Serra were discovered during the mission restoration.