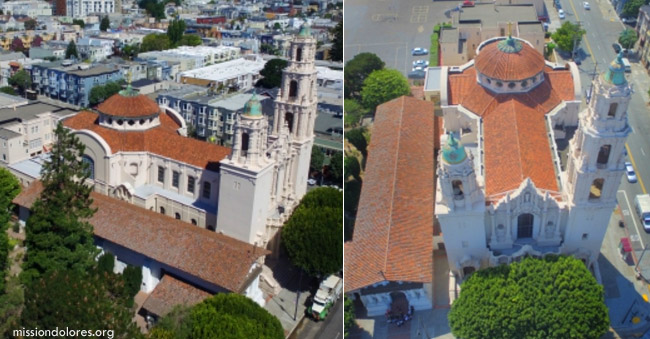 It's really hard to imagine that Mission San Francisco de Asis wasn't always surrounded by city streets packed with cars and trucks in busy San Francisco, California.  But when the oldest intact building in the City of San Francisco and the only intact Mission Chapel in the chain of 21 established under the direction of Father Serra was established, it sat on a huge expanse of land not far from a creek named Arroyo de los Dolores. It is often called Mission Dolores because of that nearby creek.

The mission settlement was named for St. Francis of Assisi, the founder of the Franciscan Order. The complex contains the only  cemetery within city limits, the final resting place for some 5,000 Ohlone and Miwok natives, as well as notable California pioneers such as the first Mexican governor and the first commandant of the Presidio.

Guided docent tours and field trips for students are available by arrangement. Guests may also visit the active church and attend services.

Of special interest are the Cemetery and Gardens adjacent to the Old Mission. Restored and planted with traditional native trees, shrubs, flowers, and plants from the 1791 period, there's also an Ohlone Indian ethno-botanic garden and examples of Native American plants and artifacts.

Towering over the original mission is the Basilica. It was dedicated in 1918 and granted Basilica status in 1952.